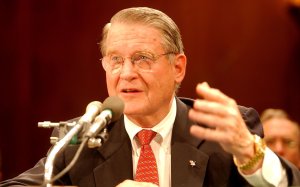 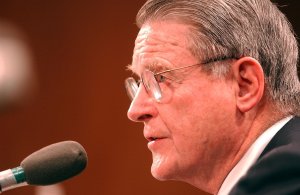 U.S. News // 1 year ago
489 retired national security leaders endorse Joe Biden for president
A group of 489 retired generals and admirals, as well as former national security officials and diplomats signed a letter endorsing Joe Biden for president Thursday.
U.S. News // 9 years ago
FBI official testifies on Hasan report
An FBI official testified before Congress that Army Maj. Nidal Hasan should have been interviewed when it was learned he was e-mailing an Islamic cleric.
U.S. News // 9 years ago
FBI didn't investigate Hasan after e-mails
FBI agents didn't investigate Army Maj. Nidal Hasan before a Fort Hood, Texas, shooting rampage despite his e-mail contact with a terrorist, an FBI review said.
Special Reports // 9 years ago
Rep. King: Fort Hood probe a sober reminder
A report on the 2009 shooting rampage at Fort Hood, Texas, is a reminder that the U.S. homeland is vulnerable to domestic terror threats, a lawmaker said.
Special Reports // 1 decade ago
U.S. military pulling equipment from Iraq
A significant portion of U.S. forces slated for Afghanistan will arrive from Iraq by the end of the summer, U.S. military generals said in Washington.
U.S. News // 1 decade ago
Webster tapped to lead Ft. Hood probe
Former FBI director William Webster has been tapped to review the agency's performance in the run-up to last month's Fort Hood, Texas, shootings, sources say.
Top News // 1 decade ago
Blackwater suit remains in arbitration
A U.S. appeals court has refused to move suits by the families of four Blackwater contractors killed in Iraq to court, shielding the company from exposure.
Odd News // 1 decade ago
Wild roosters driven from new suburb
Two Southern California residents whose dirt road is now next door to a subdivision have agreed to allow wild chickens and roosters to be removed. Nancy Miller and William Webster have been providing a place for the birds to roost on their properties on P
Top News // 1 decade ago
NASA paid shuttle families $26.6 million
Documents obtained by the Orlando (Fla.) Sentinel say NASA paid $26.6 million to relatives of the seven astronauts killed aboard the space shuttle Columbia.

William Webster (7 June 1860 – 3 October 1936) was an Australian politician. Born in Everton, Lancashire in England, he was the son of John Webster, a labourer, and Elizabeth, née Poynton. Leaving school at 13, Webster migrated to New South Wales in 1879 and, having quarried stone at Pyrmont and saved prodigiously, was able to bring the rest of his family to Sydney. By the next year he was financial secretary of the Trades and Labor Council. He married Jane Buckney on 7 June 1883 at Marrickville, and the firm he founded, Webster Bros, was one of the first in New South Wales to observe the standard wage and eight-hour day.

Webster was a member of Marrickville Municipal Council from 1887, and stood for the New South Wales Legislative Assembly seats of Canterbury, Petersham, and Wickham, only to be defeated in all of them. Although he had opposed Federation, he contested the seat of Gwydir in 1901 in an attempt to enter the Australian House of Representatives, but was unsuccessful. However, from 1901 to 1903 he was the first Labor member for Moree in the Legislative Assembly, and as a result of his success was elected to the seat of Gwydir in 1903. He was known for always answering letters and requests from his constituents personally.

His role in the royal commission on postal services was significant, and was in part responsible for the downfall of the Deakin government. On 9 July 1909, as part of these pursuits, Webster delivered a renowned speech lasting 10 hours and 57 minutes, a record which, under new time limits, can never be broken. As a result of this he became known as "the man with the iron jaw". He was Postmaster-General in the first Hughes government, and together with his Prime Minister he left the Labor Party in 1916 over conscription to join the new Nationalist Party of Australia. He retained his place in the government until the 1919 election, at which he was defeated.

FULL ARTICLE AT WIKIPEDIA.ORG
This article is licensed under the GNU Free Documentation License.
It uses material from the Wikipedia article "William Webster."