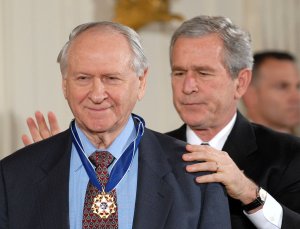 Top News // 4 years ago
The Almanac
On Dec. 17, 1975, a federal jury in Sacramento sentenced Lynette "Squeaky" Fromme to life in prison for her attempted assassination of President Gerald R. Ford.

Assuming the expertise and price are in the same ballpark

He was perhaps best known as a long-time syndicated political columnist for the New York Times and a regular contributor to "On Language" in the New York Times Magazine, a column on popular etymology, new or unusual usages, and other language-related topics.

Born to a Jewish family with Romanian roots on his father's side whose last name was originally "Safir", William Safire later added the "e" for pronunciation reasons, though some of his relatives continue to use the original spelling. Safire graduated from the Bronx High School of Science, a specialized public high school in New York City. He attended Syracuse University but dropped out after two years. He would deliver the commencement address at Syracuse in 1978 and 1990 and become a trustee of the university.

FULL ARTICLE AT WIKIPEDIA.ORG
This article is licensed under the GNU Free Documentation License.
It uses material from the Wikipedia article "William Safire."
Back to Article
/