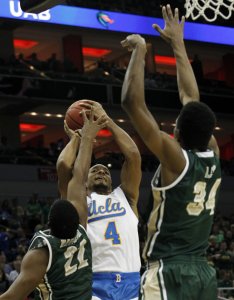 Sports News // 5 years ago
UAB topples Iowa State for first upset of tourney
William Lee's jumper with 24 seconds left gave Alabama-Birmingham the lead for good, as the 14th-seeded Blazers upset third-seeded Iowa State, 60-59, in second-round action of the NCAA Tournament.
U.S. News // 6 years ago
Judge: Same-sex couples can marry in Florida Keys
Monroe County, which includes the Florida Keys, must begin issuing marriage licenses to same-sex couples, a state judge ruled Thursday.
Health News // 7 years ago
Tylenol to add warning to read label on cap of painkiller
McNeil-PPC, the maker of Extra Strength Tylenol, said it will put a new warning on the product's cap saying it "contains acetaminophen, always read the label."
Health News // 7 years ago
Doctor: Acetaminophen poisons 100 a year
From Super Bowl parties to flu season to tax filing headaches, many people reach for acetaminophen not realizing it can build up, a U.S. doctor warns.
Health News // 9 years ago
Too much acetaminophen can be fatal
During flu and snow-shoveling season, people seeking quick pain relief may reach for acetaminophen, but a U.S. liver expert warns not to take too much.
Health News // 1 decade ago
Good health begins with heart health
A U.S. metabolic cardiologist says good health begins with taking care of the heart.
Health News // 1 decade ago
Prevalent forms of hepatitis preventable
The most common forms of hepatitis A, B, and C are preventable, a U.S. liver specialist says.
Entertainment News // 1 decade ago
Memphis to get Rock Hall of Fame exhibit
Memphis is scheduled to become the new home of a satellite exhibition from Cleveland's Rock and Roll Hall of Fame.
Top News // 1 decade ago
Radical William Brent dead in Cuba
William Lee Brent, a member of the Black Panther party who hijacked a plane to Cuba to 1969, has died in Havana at the age of 75.

Heart problems may be an indication of other serious problems elsewhere in the body, and treating the patient's overall health will help get their body back on track while addressing the root cause of the heart problem

It is easy to lose track of how much combined acetaminophen you're consuming when taking combinations of medicines, particularly for different ailments such as arthritis and perhaps a cold

William Lee (born 2 December 1941) is the Catholic bishop of the Diocese of Waterford and Lismore in Ireland.

Lee was born in Newport, County Tipperary. He is the eldest of the five children of John and Delia Lee, who ran a public house and auctioneering business in the town.

Lee received his early education at the local Convent of Mercy and Boys' National Schools and later went to Rockwell College. He studied for the priesthood at St Patrick's College, Maynooth and was ordained for the priesthood in the Diocese of Cashel and Emly on 19 June 1966. Lee studied in canon law at Maynooth, where he received a doctorate in 1969. He then served for two years in the large parish of Finglas West, Dublin. He also studied for a time at the Pontifical Gregorian University, Rome.

FULL ARTICLE AT WIKIPEDIA.ORG
This article is licensed under the GNU Free Documentation License.
It uses material from the Wikipedia article "William Lee."
Back to Article
/