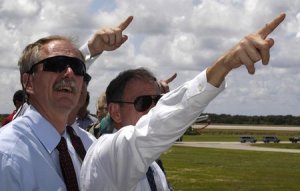 Science News // 1 year ago
NASA chief: 'Moon is the proving ground, Mars is the destination'
During a press conference on Monday, Bridenstine said he and President Donald Trump are on the same page in regards NASA's primary objectives: Establish a permanent presence on the Moon, and then head to Mars.

Gerstenmaier graduated from Akron East High School in 1973, and followed the early space programs of Mercury, Gemini, and Apollo, as a teenager. He had early dreams of being a test pilot, and after high school, enrolled at the United States Naval Academy. After seeing so many pilots returning from the Vietnam War, he thought he may not get a chance to fly, and chose to reconsider his path. He transferred to Purdue's School of Aeronautics and Astronautics, hoping to get into flight via academics. During his time at Purdue, Gerstenmaier found a great interest in space technology, and chose to focus on this area for his career.

Gerstenmaier graduated with a bachelor of science in aerospace engineering in 1977, and joined the John H. Glenn Research Center in Ohio, beginning his career with NASA. Initially doing research with supersonic wind tunnels, developing air data curve information used during entry on the space shuttle. Gerstenmaier continued his education, obtaining his master's degree in mechanical engineering at the University of Toledo in 1981.

FULL ARTICLE AT WIKIPEDIA.ORG
This article is licensed under the GNU Free Documentation License.
It uses material from the Wikipedia article "William Gerstenmaier."
Back to Article
/