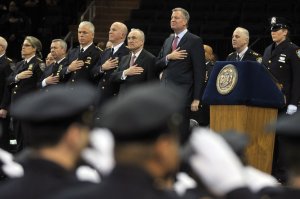 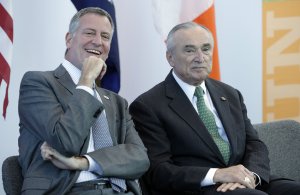 U.S. News // 5 years ago
NYPD detective paralyzed in '86 shooting remembered as superhero
Steve McDonald, a paralyzed NYPD officer who became a symbol of strength and integrity after he was shot 30 years ago, was memorialized Friday.

There is never a good time to leave, but there is a right time

We will be using a matrix that encompasses violent crime committed by the gangs, interracial crime, assaults on police officers

You can't be lucky seven times in a row. If I was, I'd be making a living hanging out at the blackjack table

Bratton began his police career at Boston Police Department before becoming Police Commissioner in New York City, where his zero-tolerance policy has been credited with reducing petty and violent crime. He moved to Los Angeles Police Department in 2001 reforming the police after the 1992 Los Angeles Riots and crime was reduced.

Bratton's policing style is influenced by the broken windows theory that if minor, petty crime is not dealt with, crime will increase. He advocates having an ethnically diverse police force representative of the population, maintaining a strong relationship with the law-abiding population, tackling police corruption, being tough on gangs and a strict no-tolerance anti-social behaviour.

FULL ARTICLE AT WIKIPEDIA.ORG
This article is licensed under the GNU Free Documentation License.
It uses material from the Wikipedia article "William Bratton."