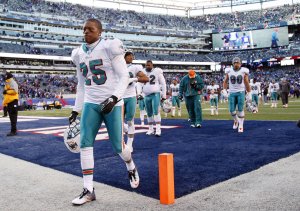 NFL // 2 years ago
Nothing on line as top-seeded Saints host Panthers
The New Orleans Saints have nothing to play for in Sunday's regular-season finale. Neither do the Carolina Panthers.

On This Day: NASA intentionally crashes Lunar Prospector into moon

Allen was a four-year letterwinner for the Ohio State Buckeyes, and was a consensus first-team All-America selection in his senior year. In his first three seasons at Ohio State he played behind three-time All American Mike Doss, seeing action on the field primarily in nickel coverage on passing downs.

Allen is perhaps best remembered among college football fans for two plays made during the 2002 national championship season. The first occurred during the 2002 Ohio State-Michigan game, intercepting a pass from Michigan quarterback John Navarre during the closing seconds to preserve the 14-9 victory and an undefeated regular season. The second play was only one game later in the 2003 Fiesta Bowl for the national championship. In the second half, Allen tackled Miami running back Willis McGahee and delivered a helmet blow to his left knee. McGahee had to be helped off the field; he suffered ligament damage and was forced to miss his whole rookie year in the NFL.

FULL ARTICLE AT WIKIPEDIA.ORG
This article is licensed under the GNU Free Documentation License.
It uses material from the Wikipedia article "Will Allen."
Back to Article
/