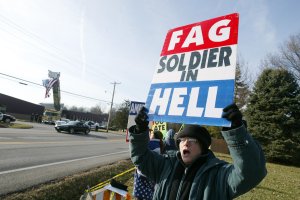 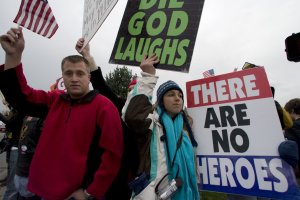 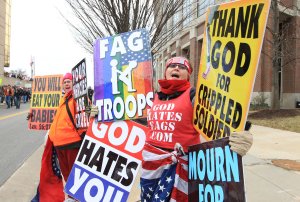 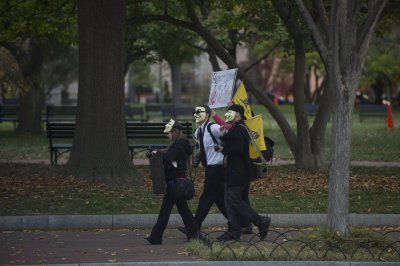 U.S. News // 5 years ago
Politicians deny involvement in KKK after hacker post
Several politicians have denied reports they're affiliated with the Ku Klux Klan in response to leaked data from a questionable source.

The Westboro Baptist Church (WBC) is an independent Baptist church known for its extreme stance against homosexuality and its protest activities, which include picketing funerals and desecrating the American flag. The church is widely described as a hate group and is monitored as such by the Anti-Defamation League and Southern Poverty Law Center. It is headed by Fred Phelps and consists mostly of members of his large family; in 2007, it had 71 members. Located in a residential neighborhood on the west side of Topeka about three miles west of the Kansas State Capitol at 3701 West 12th Street, Topeka, Kansas, United States, its first public service was held on the afternoon of Sunday, November 27, 1955.

The church has been actively involved in the anti-gay movement since at least 1991 when it sought a crackdown on homosexual activity at Gage Park about a mile northwest of the church. In addition to anti-gay protests at military funerals, the organization pickets other celebrity funerals that are likely to get it media attention.

The WBC is not affiliated with any known Baptist conventions or associations. The church describes itself as following Primitive Baptist and Calvinist principles, though mainstream Primitive Baptists reject the WBC and Phelps.

FULL ARTICLE AT WIKIPEDIA.ORG
This article is licensed under the GNU Free Documentation License.
It uses material from the Wikipedia article "Westboro Baptist Church."
Back to Article
/