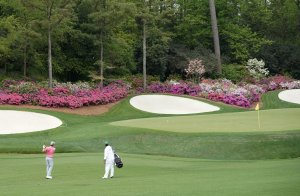 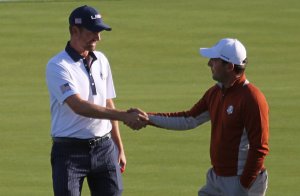 Sports News // 2 weeks ago
Paul Casey leads Masters in rain-shortened first day; Tiger starts strong
Paul Casey grabbed a two-shot lead before Thursday's first round of the 2020 Masters was suspended in an unusual autumn edition of the tournament at Augusta National Golf Club.

Sports News // 2 months ago
U.S. Open golf 2020: Tee times, how to watch, betting favorites
Golfers are at Winged Foot Golf Club and ready to begin play in this week's U.S. Open from Thursday through Sunday in Mamaroneck, N.Y.

Sports News // 3 months ago
Golfers Varner, Hoge, Sloan share lead at Wyndham Championship
Harold Varner III, Roger Sloan and Tom Hoge each carded 8-under par 62s for a three-way share of the lead in the first round of the 2020 Wyndham Championship.

Sports News // 4 months ago
Webb Simpson, Cameron Champ return to PGA Tour after COVID-19-related withdraws
World No. 6 Webb Simpson and No. 80 Cameron Champ returned Thursday for the PGA Tour's Rocket Mortgage Classic after they withdrew from the Travelers Championship eight days ago due to coronavirus-related precautions.

Simpson was born in Raleigh, North Carolina. He played collegiate golf at Wake Forest University and was a three-time All-American and the ACC Player of the Year in 2008. He won several prestigious amateur tournaments. He played on the victorious 2007 Walker Cup team and the 2007 Palmer Cup team.

After turning professional in June 2008, Simpson played on the PGA Tour and Nationwide Tour on sponsor's exemptions. He recorded two runner-up finishes on the Nationwide Tour. He then competed in the PGA Tour's qualifying school and finished T7 to earn his Tour card for 2009. He had a successful start to his rookie year with a 5th place finish at the Bob Hope Classic and a 9th place finish at the Sony Open in Hawaii. He ended the season with four top 10 finishes and comfortably retained his tour card ranked 70th on the money list.

FULL ARTICLE AT WIKIPEDIA.ORG
This article is licensed under the GNU Free Documentation License.
It uses material from the Wikipedia article "Webb Simpson."
Back to Article
/