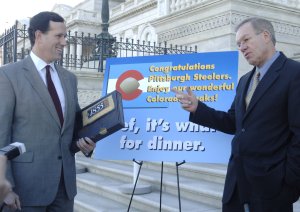 The people placed their trust in me based on a promise I made to them, and I am honoring that promise

Alan Wayne Allard (born December 2, 1943) is a member of the Republican Party, and was a United States Senator from Colorado. He did not seek re-election in 2008.

Allard was born in Fort Collins, Colorado to Sibyl Jean Stewart and Amos Wilson Allard. He was raised on a ranch near Walden, Colorado. He received a Doctor of Veterinary Medicine degree from Colorado State University in 1968.

Allard continued to run a veterinary practice full-time, while representing Larimer and Weld Counties in the Colorado State Senate, from 1983 to 1990. During his tenure he was a strong supporter of fiscal responsibility and the preservation of a citizen legislature. Allard's influence on local politics is still felt today as he is the sponsor of Colorado's law limiting state legislative sessions to 120 days.

FULL ARTICLE AT WIKIPEDIA.ORG
This article is licensed under the GNU Free Documentation License.
It uses material from the Wikipedia article "Wayne Allard."
Back to Article
/