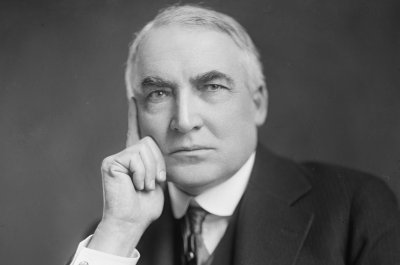 U.S. News // 5 years ago
Clinton: Obama as a Supreme Court justice would be 'a great idea'
Former Secretary of State Hillary Clinton said it would be "a great idea" to appoint President Barack to the Supreme Court if she were president.

His conservativism, affable manner, and "make no enemies" campaign strategy made Harding the compromise choice at the 1920 Republican National Convention. During his presidential campaign, in the aftermath of World War I, he promised a return of the nation to "normalcy". This "America first" campaign encouraged industrialization and a strong economy independent of foreign influence. Harding departed from the progressive movement that had dominated Congress since President Theodore Roosevelt. In the 1920 election, he and his running mate, Calvin Coolidge, defeated Democrat and fellow Ohioan James M. Cox, in the largest presidential popular vote landslide in American history (60.36% to 34.19%) since first recorded in 1824.

President Harding rewarded friends and political contributors, referred to as the Ohio Gang, with financially powerful positions. Scandals and corruption eventually pervaded his administration; one of his own cabinet and several of his appointees were eventually tried, convicted, and sent to prison for bribery or defrauding the federal government. Harding did however make some notably positive appointments to his cabinet.

FULL ARTICLE AT WIKIPEDIA.ORG
This article is licensed under the GNU Free Documentation License.
It uses material from the Wikipedia article "Warren G. Harding."
Back to Article
/