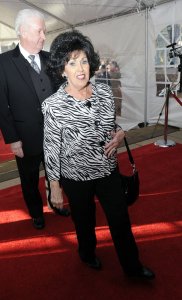 Entertainment News // 1 year ago
Famous birthdays for Oct. 20: John Krasinski, Viggo Mortensen
Actor John Krasinski turns 40 and actor Viggo Mortensen turns 61, among the famous birthdays for Oct. 20.
Entertainment News // 8 years ago
People in the news
The latest news on today's hottest celebrities ...
Music // 8 years ago
Divas plan tribute to Winehouse
The "VH1 Divas Celebrates Soul" show will feature a special tribute to the late British soul singer Amy Winehouse, the cable network said.
Music // 9 years ago
Steel guitarist Ralph Mooney dies
Steel guitarist Ralph Mooney has died of complications of cancer at his home in Kennedale, Texas, his wife said. He was 82.
Music // 1 decade ago
Adele's 2nd CD set for February release
Columbia Records has announced plans to release "21," the new studio album from British singer-songwriter Adele, early next year.
Entertainment News // 1 decade ago
Metallica, Run-DMC get Rock Hall nods
Metallica, Run-DMC and the Stooges are among the acts nominated for induction into the Rock and Roll Hall of Fame next year in Cleveland, it was announced.
Entertainment News // 1 decade ago
Rock Hall of Fame announces finalists
First-time nominee U2 leads the 15 finalists for the Rock and Roll Hall of Fame's class of 2005.
Odd News // 1 decade ago
People
Maurice Gibb remembered as 'nice guy,' Zellweger waxes and wanes for film roles, and other stories about celebrities.
Odd News // 1 decade ago
Country Music News
Roy Lanham of the Sons of the Pioneers, born in Corbin, Ky., 1923. Jim Stafford born in Eloise, Fla., 1944.
Odd News // 1 decade ago
Rock News: Music's high and low notes
Editors at Spin magazine will name the Strokes, Eminem and the Detroit duo the White Stripes as the best of 2002 in the January "Year in Music" issue, on newsstands Dec. 10.

Wanda Lavonne Jackson (born October 20, 1937) is an American singer, songwriter, pianist and guitarist who had success in the mid-1950s and 60s as one of the first popular female rockabilly singers and a pioneering rock and roll artist. She is known to many as the Queen (or First Lady) of Rockabilly.

Jackson mixed country music with fast-moving rockabilly, often recording them on opposite sides of a record. As rockabilly declined in popularity in the mid-1960s, she moved to a successful career in mainstream country music with a string of hits between 1966 and 1973, including "Tears Will Be the Chaser for Your Wine", "A Woman Lives for Love" and "Fancy Satin Pillows".

She has enjoyed a resurgence of popularity among rockabilly revivalists in Europe, and was inducted into the Rock and Roll Hall of Fame as an Early Influence in 2009.

FULL ARTICLE AT WIKIPEDIA.ORG
This article is licensed under the GNU Free Documentation License.
It uses material from the Wikipedia article "Wanda Jackson."
Back to Article
/