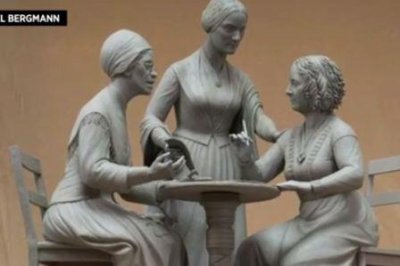 U.S. News // 11 months ago
3 female pioneers to be honored with statue in NYC's Central Park
Three iconic American women will be memorialized with the first statue honoring women in New York City's Central Park, after city officials approved the marker.

U.S. News // 2 years ago
Ex-officer Slager gets 20 years for Walter Scott shooting
A former South Carolina officer was sentenced Thursday to 20 years in prison after a judge found him guilty of murder in the death of a motorist two years ago.

Sir Walter Scott, 1st Baronet (15 August 1771 – 21 September 1832) was a Scottish historical novelist, playwright, and poet, popular throughout much of the world during his time.

Scott was the first English-language author to have a truly international career in his lifetime, with many contemporary readers in Europe, Australia, and North America. His novels and poetry are still read, and many of his works remain classics of both English-language literature and of Scottish literature. Famous titles include Ivanhoe, Rob Roy, The Lady of The Lake, Waverley, The Heart of Midlothian and The Bride of Lammermoor.

Born in College Wynd in the Old Town of Edinburgh in 1771, the son of a solicitor, Scott survived a childhood bout of polio in 1773 that left him lame. To cure his lameness he was sent in 1773 to live in the rural Borders region at his grandparents' farm at Sandyknowe, adjacent to the ruin of Smailholm Tower, the earlier family home. Here he was taught to read by his aunt Jenny, and learned from her the speech patterns and many of the tales and legends that characterised much of his work. In January 1775 he returned to Edinburgh, and that summer went with his aunt Jenny to take spa treatment at Bath in England, where they lived at 6 South Parade. In the winter of 1776 he went back to Sandyknowe, with another attempt at a water cure at Prestonpans during the following summer.

FULL ARTICLE AT WIKIPEDIA.ORG
This article is licensed under the GNU Free Documentation License.
It uses material from the Wikipedia article "Walter Scott."
Back to Article
/