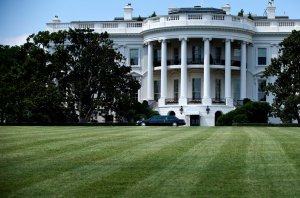 U.S. News // 2 months ago
Fauci: U.S. on track for 'a whole lot of hurt' from COVID-19 this winter
Dr. Anthony Fauci warned that the United States is primed to experience "a whole lot of hurt" as winter approaches due to the potential for surging COVID-19 cases and deaths, comments that drew a rebuke from the White Ho

U.S. News // 3 months ago
Trump pressed on COVID-19 response, Supreme Court at Miami town hall
President Donald Trump participated in a town hall event in Miami on Thursday night, where he was pressed by questions on his handling of the COVID-19 pandemic, the Supreme Court and healthcare.

U.S. News // 3 months ago
Trump, Biden to stage dueling town halls after 2nd debate canceled
A clash between President Donald Trump and Democratic nominee Joe Biden that was supposed to occur in the second presidential debate on Thursday will now be a televised bout on different networks.

U.S. News // 3 months ago
Trump touts health at Florida rally after consecutive negative COVID-19 tests
President Donald Trump touted his health in his first in-person rally outside of the White House since testing positive for COVID-19 in Florida on Monday, saying he felt "powerful."

U.S. News // 3 months ago
Twitter flags Trump tweet claiming he is 'immune' to COVID-19 after treatment
Twitter on Sunday flagged a tweet by President Donald Trump claiming he is now "immune" to COVID-19 infection after recovering from the virus, saying it violated the platform's rules.

Over the last couple of years, there's a subset of patients with more than just one human system engaged in recovery -- emotional, physical and mental

Major Walter Reed, M.D., (September 13, 1851 – November 22, 1902) was a U.S. Army physician who in 1900 led the team that postulated and confirmed the theory that yellow fever is transmitted by a particular mosquito species, rather than by direct contact. This insight gave impetus to the new fields of epidemiology and biomedicine, and most immediately allowed the resumption and completion of work on the Panama Canal (1904–1914) by the United States. Reed followed work started by Carlos Finlay and directed by George Miller Sternberg ("first U.S. bacteriologist").

After two year-long classes at the University of Virginia, Reed completed the M.D. degree in 1869, two months before he turned 18 (he was the youngest then, and is still today the youngest student of the University of Virginia to receive an MD degree). He then enrolled at the New York University's Bellevue Hospital Medical College in Manhattan, New York, where he obtained a second M.D. in 1870. After interning at several New York City hospitals, he worked for the New York Board of Health until 1875. He married Emilie (born Emily) Lawrence on April 26, 1876 and took her West with him. Later, Emilie would give birth to a son and a daughter and the couple would adopt a Native American girl while posted in frontier camps.

FULL ARTICLE AT WIKIPEDIA.ORG
This article is licensed under the GNU Free Documentation License.
It uses material from the Wikipedia article "Walter Reed."
Back to Article
/