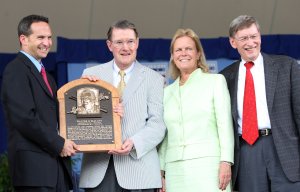 Walter Francis O'Malley (October 9, 1903 – August 9, 1979) was an American sports executive who owned the Brooklyn/Los Angeles Dodgers team in Major League Baseball from 1950 to 1979. He served as Brooklyn Dodgers chief legal counsel when Jackie Robinson broke the racial color barrier in 1947. In 1958, as owner of the Dodgers, he brought major league baseball to the West Coast, moving the Dodgers from Brooklyn to Los Angeles and coordinating the move of the New York Giants to San Francisco at a time when there were no teams west of Missouri. For this, he was long vilified by Brooklyn Dodgers fans. However, neutral parties describe him as a visionary for the same business action, and many authorities cite him as one of the most influential sportsmen of the 20th century. His detractors who say that he was not a visionary, but instead a man who was in the right place at the right time, still regard him as the most powerful and influential owner in baseball after moving the team. He was elected to the National Baseball Hall of Fame for his contributions to and influence on the game of baseball.

O'Malley's Irish father, Edwin Joseph O'Malley, was politically connected. Walter, a University of Pennsylvania Salutatorian, went on to obtain a Juris Doctorate, and he used the combination of his family connections, his personal contacts, and both his educational and vocational skills to rise to prominence. First, he became an entrepreneur involved in public works contracting, and then he became an executive with the Dodgers. He progressed from being a team lawyer to being both the Dodgers' owner and president, and he eventually made the business decision to relocate the Dodgers franchise. Although he moved the franchise, O'Malley is known as a businessman whose major philosophy was stability through loyalty to and from his employees.

O'Malley ceded the team presidency to his son, Peter, in 1970 but retained the titles of owner and chairman of the Dodgers until his death in 1979. During the 1975 season, the Dodgers' inability to negotiate a contract with Andy Messersmith led to the Seitz decision, which limited the baseball reserve clause and paved the way for modern free agency. He bequeathed the team to his children Peter O'Malley and Therese O'Malley Seidler upon his death in 1979.

FULL ARTICLE AT WIKIPEDIA.ORG
This article is licensed under the GNU Free Documentation License.
It uses material from the Wikipedia article "Walter O'Malley."
Back to Article
/