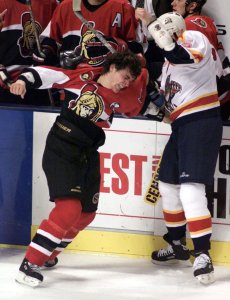 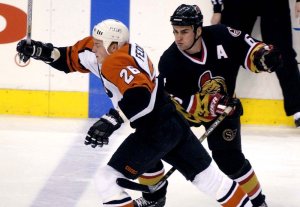 Wade Redden (born June 12, 1977) is a Canadian professional ice hockey defenceman currently playing for the New York Rangers of the National Hockey League (NHL). He joined the Rangers in 2008 after 11 seasons with the Ottawa Senators. He has played for Canada internationally seven times, winning two gold medals in the World Junior Championships and once in the World Cup of Hockey.

Redden grew up in Hillmond, Saskatchewan. As a youngster, Wade played hockey and baseball. Wade completed Kindergarten to grade nine at the Hillmond School. He then went to attend the Lloydminster Comprehensive School for grade ten, and then he completed grade 11, and lastly 12 in Brandon, Manitoba. He is the youngest of three children and has an older sister Niki and an older brother Bart. He was also involved in the filming of the television show Road Hockey Rumble in his hometown. He is also a good friend with Lee Goren.

Since moving to Ottawa to play NHL hockey, he became involved in the Ottawa community. Redden sponsored a suite at the Scotiabank Place named Wade's World reserved for critically and terminally-ill children, that he paid for while a member of the Senators from 1997 until 2008. He was also involved with the charity "65 Roses Club" committed to raise money for cystic fibrosis research.

FULL ARTICLE AT WIKIPEDIA.ORG
This article is licensed under the GNU Free Documentation License.
It uses material from the Wikipedia article "Wade Redden."
Back to Article
/