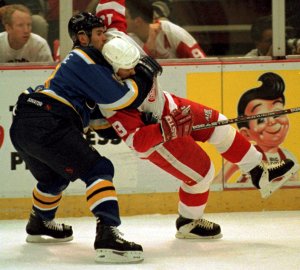 Vyacheslav "Slava" Anatolevich Kozlov (Russian: Вячеслав Анатольевич Козлов, born May 3, 1972, in Voskresensk, U.S.S.R.) is a Russian ice hockey left winger and alternate captain who currently plays for the Atlanta Thrashers of the National Hockey League. He is a two-time Stanley Cup champion (1997, 1998) from his years playing with the Detroit Red Wings. He has also played for the Buffalo Sabres.

Kozlov was drafted 45th overall by the Detroit Red Wings in the 1990 NHL Entry Draft. Kozlov made his NHL debut on March 12, 1992, recording two assists in Detroit's 5–4 win over the St. Louis Blues. He became a regular player with Detroit in the 1993–94 NHL season. After the Red Wings acquired Igor Larionov in 1995, coach Scotty Bowman created a 5–man Russian unit (the "Russian Five") consisting of forwards Kozlov, Sergei Fedorov and Larionov, and defensemen Vladimir Konstantinov and Viacheslav Fetisov. This group helped Detroit to a Stanley Cup win in 1997.

Kozlov played for Detroit until the summer of 2001, when he was traded to the Buffalo Sabres in the trade that put Dominik Hašek in a Red Wings jersey. After one injury-shortened season in Buffalo, Kozlov was traded to the Atlanta Thrashers.

FULL ARTICLE AT WIKIPEDIA.ORG
This article is licensed under the GNU Free Documentation License.
It uses material from the Wikipedia article "Vyacheslav Kozlov."