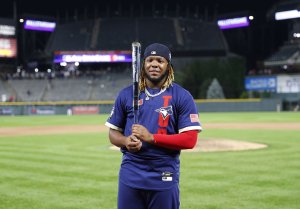 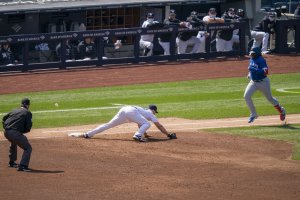 MLB // 4 months ago
Blue Jays' Vladimir Guerrero Jr. smashes career-long homer vs. Rangers
Vladimir Guerrero put the baseball world on notice about his placement among MVP favorites with his first home run of 2022, smashing the solo shot a career-long 467 feet in a Toronto Blue Jays loss to the Texas Rangers.

MLB // 10 months ago
Jays' Marcus Semien sets 2B homer record, Bo Bichette bombs beat Yankees
Marcus Semien set a record for the most home runs hit in a season by a second baseman and shortstop Bo Bichette hit a 399-foot go-head shot to lead the Toronto Blue Jays to a win over the New York Yankees.

He's one guy you do not have to throw a strike to, that's for sure

A nine-time All Star, he is widely recognized as one of the best all-around players in the game because of his impressive offensive production (regularly hitting for power and average), and (prior to injuries that robbed him of range) stellar defense (which is highlighted by one of the strongest throwing arms in baseball). He is also regarded as the game's premier "bad ball hitter," for his ability to consistently hit balls thrown well outside of his strike zone, a skill made evident on August 14, 2009, when Guerrero hit a pitch which bounced in front of home plate.

FULL ARTICLE AT WIKIPEDIA.ORG
This article is licensed under the GNU Free Documentation License.
It uses material from the Wikipedia article "Vladimir Guerrero."