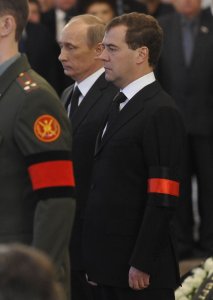 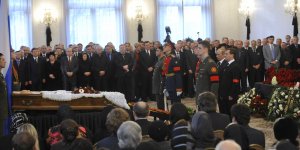 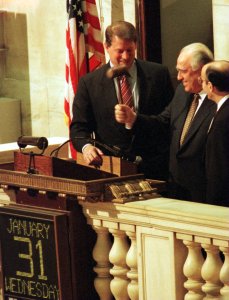 World News // 1 decade ago
Leaders praise Chernomyrdin at funeral
Former Prime Minister Viktor Chernomyrdin was buried Friday in Moscow's Novodevichy Cemetery in a service attended by Russia's top leaders.
World News // 1 decade ago
Russian ex-premier Chernomyrdin dies
Former Prime Minister Viktor Chernomyrdin died early Wednesday morning at 72, Russian media reported.
Top News // 1 decade ago
Russia: Ukraine trying to sour relations
The Russian Foreign Ministry said Wednesday Ukraine's threats to expel its ambassador is another attempt to sour relations between the two neighbors.
Energy News // 1 decade ago
Analysis: Turkmenistan, Russia and China
The most fascinating energy development of the last 14 months has been the furious, if covert, struggle involving Russia, China and the United States to develop Turkmenistan's vast natural gas deposits since the death of Turkmen President Saparmurat Niyazov in December 2006.
Outside View // 1 decade ago
Outside View: Kiev's NATO burden -- Part 2
Joining NATO will demand sacrifices and additional efforts from Ukraine, such as fulfilling the Membership Action Plan.
Energy News // 1 decade ago
Analysis: Turkmenistan looks to U.S.
What a difference nine months makes. Turkmen President Gurbanguly Berdymukhammedov, nine months ago a relatively unknown Turkmen apparatchik, made his first official visit to the United States, attending the opening of the United Nations' 62nd General Assembly and dazzling the Bush administration with promises of Western access to Turkmen energy resources. Given longstanding Turkmen grievances against Russia underpaying for its most valuable export, against all odds Washington might have staked a tentative claim to the Caspian basin’s last underdeveloped hydrocarbon assets, which Moscow formerly saw as its own. If the negotiations come to fruition, they represent an astonishing turnaround in U.S. fortunes in Ashgabat, which up to now have been marked by a mixture of indifference and ineptitude.
Energy News // 1 decade ago
Analysis: Post-Niyazov Turkmen energy
The death of Turkmen leader Saparmurat Niyazov last Dec. 21 set off an unseemly but discreet scramble among a number of nations eager for access to the world's
Odd News // 1 decade ago
The Almanac
Today is Monday, March 27, the 86th day of 2006 with 279 to follow.
Business News // 1 decade ago
Russia raising export gas cost for Ukraine
Russia is raising the cost of natural gas for Ukraine to a level comparable to the cost of the commodity in Europe.
Odd News // 1 decade ago
The Almanac
Today is Sunday, March 27, the 86th day of 2005 with 279 to follow.

Viktor Stepanovich Chernomyrdin (Russian: Ви́ктор Степа́нович Черномы́рдин) (born 9 April 1938) is a Russian politician. Chernomyrdin was Prime Minister of Russia from 1992 to 1998. Since 2001, he has been Russia's ambassador to Ukraine.

Chernomyrdin's father was a labourer. Viktor was one of his five children. Chernomyrdin completed school education in 1957 and found employment as a mechanic in an oil refinery in Orsk. He worked there until 1962, except for two years of compulsory military service from 1957 to 1960. His other occupations on the plant during this period included machinist, operator and chief of technical installations.

FULL ARTICLE AT WIKIPEDIA.ORG
This article is licensed under the GNU Free Documentation License.
It uses material from the Wikipedia article "Viktor Chernomyrdin."
Back to Article
/