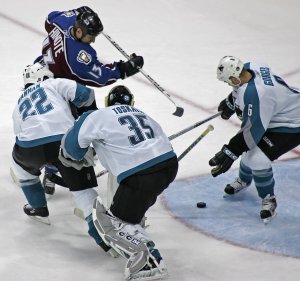 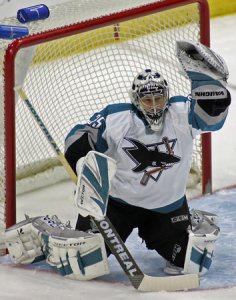 Vesa Tapani Toskala (born on May 20, 1977 in Kangasala, Finland), is a professional ice hockey goaltender currently with the Calgary Flames of the National Hockey League.

Toskala was selected by San Jose in the 1995 NHL Entry Draft (4th round, 90th overall). The Sharks also took fellow Finn Miikka Kiprusoff in the fifth round. Toskala turned heads with his stellar play in the 1998–99 season with Ilves of the SM-liiga, where he went 21-12-0 with a 2.14 GAA and a 0.916 save percentage and posted five shutouts. The next season, playing a style that modeled after Markus Korhonen he played with Färjestads BK of the Swedish Elitserien and posted an impressive 2.59 GAA. In one game with Färjestad, Toskala scored a goal. At this point, Toskala was not sure if he wanted to have a career in hockey. Wanting a more stable job, he was going to quit hockey altogether to go to school full-time, before San Jose enticed him to North America.

He holds the San Jose Club record as the only goalie to record a multiple point game as he tallied two assists against Chicago on February 3, 2007.

FULL ARTICLE AT WIKIPEDIA.ORG
This article is licensed under the GNU Free Documentation License.
It uses material from the Wikipedia article "Vesa Toskala."
Back to Article
/