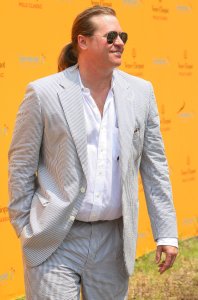 TV // 7 months ago
Jon M. Chu to helm pilot for Disney+ 'Willow' sequel series
"Crazy Rich Asians" and "In the Heights" filmmaker Jon M. Chu has announced he is working with Disney+ on a "Willow" followup series.

TV // 10 months ago
'MacGruber': Peacock orders Will Forte comedy series
"MacGruber," a new series based on Will Forte's "MacGyver" parody, is coming to Peacock.

Movies // 10 months ago
Art imitates life for Val Kilmer, daughter Mercedes, in 'Paydirt'
Mercedes Kilmer said she was happy to make her feature film debut in "Paydirt" opposite a talented leading man -- her father, "Top Gun" and "The Doors" icon Val Kilmer.

This story can only be told now, because the insurance can't catch him

Val Edward Kilmer (born December 31, 1959) is an American actor. Originally a stage actor, Kilmer became popular in the mid-1980s after a string of appearances in comedy films, starting with Top Secret! (1984), then the cult classic Real Genius (1985), as well as blockbuster action films, including a role in Top Gun and a lead role in Willow.

During the 1990s, Kilmer gained critical respect after a series of films that were also commercially successful, including his roles as Jim Morrison in The Doors, Doc Holliday in 1993's Tombstone, Batman in 1995's Batman Forever, Chris Shiherlis in 1995's Heat and Simon Templar in 1997's The Saint. During the early 2000s, Kilmer appeared in several well-received roles, including The Salton Sea, Spartan, and supporting performances in Kiss Kiss Bang Bang, Alexander, and as the voice of KITT in Knight Rider.

Kilmer was born in Los Angeles, California, the son of Gladys (née Ekstadt) and Eugene Kilmer, an aerospace equipment distributor and real estate developer. Kilmer's grandfather was a gold miner in New Mexico; the poet Joyce Kilmer is a second cousin of Kilmer's. Kilmer is of German, Swedish, Irish, and Cherokee descent. He grew up in the San Fernando Valley with his two siblings, older brother Mark and younger brother Wesley. Kilmer, who was raised a Christian Scientist, attended Chatsworth High School—where his classmates included Kevin Spacey and Mare Winningham—as well as Hollywood's Professional's School. He also attended Berkeley Hall School, a Christian Science school in Los Angeles, from nursery school until graduation from the 9th grade. At the age of 17, he was at the time the youngest person to be accepted into Juilliard's drama program. He was in Group 10 of the Drama Division. His brother Wesley died as a teenager due to an epileptic seizure in a swimming pool.

FULL ARTICLE AT WIKIPEDIA.ORG
This article is licensed under the GNU Free Documentation License.
It uses material from the Wikipedia article "Val Kilmer."
Back to Article
/