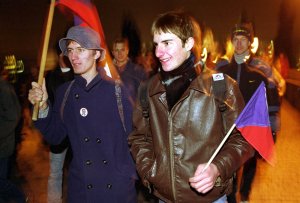 Top News // 4 years ago
The Almanac
On Feb. 2, 1933, two days after becoming chancellor of Germany, Adolf Hitler ordered dissolution of the Parliament.

Opinion // 4 years ago
Russia's revenge: Why Donald Trump's triumph is a big win for Vladimir Putin
Where much of the world has received news of Donald Trump's election victory with shock, Russia has been quick to congratulate the president-elect.

Top News // 4 years ago
The Almanac
On Oct. 5, 1882, Dr. Robert Goddard, "Father of American Rocketry" and a pioneer in the theoretical exploration of space, was born in Worcester, MA.

The course of the illness is unstable. Deterioration follows improvement and vice versa

Václav Havel (Czech pronunciation:   ( listen)) (born 5 October 1936 in Czechoslovakia) is a Czech playwright, essayist, dissident and politician. He was the tenth and last President of Czechoslovakia (1989–92) and the first President of the Czech Republic (1993–2003). He has written over twenty plays and numerous non-fiction works, translated internationally. He has received the US Presidential Medal of Freedom, the Philadelphia Liberty Medal, the Order of Canada, the freedom medal of the Four Freedoms Award, and the Ambassador of Conscience Award. He was also voted 4th in Prospect Magazine's 2005 global poll of the world's top 100 intellectuals. He is a founding signatory of the Prague Declaration on European Conscience and Communism.

Beginning in the 1960s, his work turned to focus on the politics of Czechoslovakia. After the Prague Spring, he became increasingly active. In 1977, his involvement with the human rights manifesto Charter 77 brought him international fame as the leader of the opposition in Czechoslovakia; it also led to his imprisonment. The 1989 "Velvet Revolution" launched Havel into the presidency. In this role he led Czechoslovakia and later the Czech Republic to multi-party democracy. His thirteen years in office saw radical change in his nation, including its split with Slovakia, which Havel opposed, its accession into NATO and start of the negotiations for membership in the European Union, which was attained in 2004.

Václav Havel was born in Prague, on October 5, 1936. He grew up in a well-known and wealthy entrepreneurial and intellectual family, which was closely linked to the cultural and political events in Czechoslovakia from the 1920s to the 1940s. His father was the owner of the suburb Barrandov which was located on the highest point of Prague. Havel's mother came from a well known family; her father was an ambassador and well-known journalist. Because of Havel's bourgeois history, the Communist regime did not allow Havel to study formally after he had completed his required schooling in 1951. In the first part of the 1950s, the young Havel entered into a four-year apprenticeship as a chemical laboratory assistant and simultaneously took evening classes; he completed his secondary education in 1954. For political reasons, he was not accepted into any post-secondary school with a humanities program; therefore, he opted to study at the Faculty of Economics of Czech Technical University in Prague but dropped out after two years. In 1964, Havel married proletarian Olga Šplíchalová, much to the displeasure of his mother.

FULL ARTICLE AT WIKIPEDIA.ORG
This article is licensed under the GNU Free Documentation License.
It uses material from the Wikipedia article "Vaclav Havel."
Back to Article
/