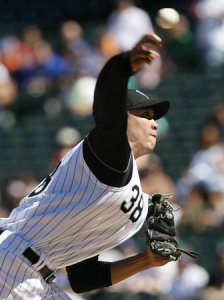 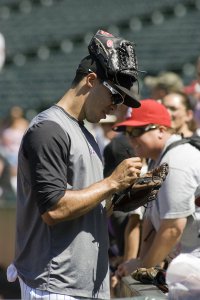 MLB // 2 years ago
Hot pitchers match up in Rockies-Diamondbacks series opener
Left-handers Tyler Anderson and Patrick Corbin will oppose each other when the Colorado Rockies and the Arizona Diamondbacks begin a three-game series Tuesday.

MLB // 3 years ago
New pitcher Jose Quintana sparkles in Chicago Cubs' debut, beats Baltimore Orioles
Three days after the Chicago Cubs paid a steep price to their crosstown rival for another front-line starting pitcher, Jose Quintana showed why it was worth it. 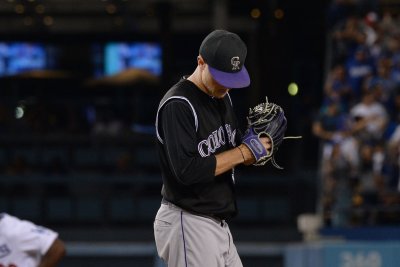 MLB // 3 years ago
Milwaukee Brewers, resurgent Eric Thames blast Baltimore Orioles
The City of Milwaukee holds its annual Independence Day celebration the night before July 4, but Eric Thames made sure there would be plenty of fireworks.

Ubaldo Jiménez García (born January 22, 1984) is a Major League Baseball starting pitcher for the Cleveland Indians. He pitched the first no-hitter in Colorado Rockies history on April 17, 2010, against the Atlanta Braves.

Jiménez made his Major League Baseball debut on September 26, 2006. He came in as a relief pitcher for the Colorado Rockies during the eighth inning of an 11–4 home loss to the Los Angeles Dodgers. He allowed two hits and no runs. He would make his first major league start on October 1 against the Chicago Cubs on the road, which was the last game of the regular season. Jiménez allowed three hits and three earned runs over a span of 6 ⅔ innings in a 8–5 loss. He didn't receive a decision for the game.

Jiménez earned his first major league win on July 29, 2007 at home against the Los Angeles Dodgers. He pitched six innings, giving up four hits and two earned runs. The Rockies won the game, 9–6. On September 5, he gained the distinction of giving up Barry Bonds's 762nd and final career home run. Jiménez made his Major League Baseball postseason debut on October 6 during Game 3 of the 2007 National League Division Series in Colorado against the Philadelphia Phillies. He started the game and pitched six innings, allowing three hits and one earned run, as part of a 2–1 victory (the win gave the Rockies a series sweep over the Phillies). However, Jiménez didn't receive a decision for the game. He started his second consecutive game of the postseason on October 12, which was Game 2 of the 2007 National League Championship Series against the Arizona Diamondbacks on the road. He pitched five innings, giving up one hit and one earned run. The Rockies would eventually win the game, 3–2, but Jiménez received his second straight postseason no-decision. Colorado swept Arizona and faced the Boston Red Sox in the 2007 World Series. Jiménez started Game 2, suffering a 2–1 loss in Boston. He allowed three hits and two earned runs in 4 ⅔ innings. Boston went on to sweep Colorado.

FULL ARTICLE AT WIKIPEDIA.ORG
This article is licensed under the GNU Free Documentation License.
It uses material from the Wikipedia article "Ubaldo Jimenez."
Back to Article
/