U.S. News // 10 months ago
Union workers strike at 10 campuses, 5 hospitals in California university system
Tens of thousands of workers in the statewide University of California system will strike Thursday over concerns that jobs are being outsourced, union officials said. 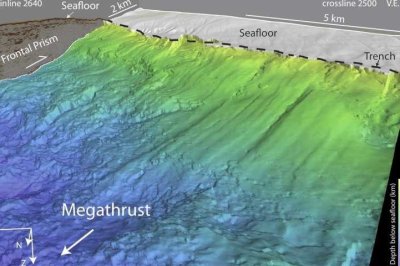 Science News // 2 years ago
3D survey details dangerous megathrust fault off Costa Rican coast
Scientists have a better understanding of the dynamics of a dangerous megafault off the coast of Costa Rica, thanks to a new survey by researchers at UCSC.

Science News // 5 years ago
Study: deep-diving marine mammals suffer heart arrhythmias
In a recent study, scientists at the University of California, Santa Cruz found that many seals and dolphins suffer irregular heartbeats during deep dives.
Science News // 5 years ago
The moon is (kind of) flat, and scientists know why
Researchers at the University of California, Santa Cruz (UCSC) say that tidal forces early in the moon's formational history account for its odd appearance.
Odd News // 6 years ago
Study: Yosemite bears eating less human food
California researchers said they analyzed hair and bone samples of Yosemite National Park bears to track the presence of human food in their diets.

Founded in 1965, UC Santa Cruz began as a showcase for progressive, cross-disciplinary undergraduate education, innovative teaching methods and contemporary architecture. Since then, it has evolved into a modern research university with a wide variety of both undergraduate and graduate programs, while retaining its reputation for strong undergraduate support and student political activism. The residential college system, which consists of ten small colleges, is intended to combine the student support of a small college with the resources of a major university.

Although some of the original founders had already outlined plans for an institution like UCSC as early as the 1930s, the opportunity to realize their vision did not present itself until the City of Santa Cruz made a bid to the University of California Regents in the mid-1950s to build a campus just outside town, in the foothills of the Santa Cruz Mountains. The Santa Cruz site was selected over a competing proposal to build the campus closer to the population center of San Jose. Santa Cruz was selected for the beauty, rather than the practicality, of its location, however, and its remoteness led to the decision to develop a residential college system that would house most of the students on-campus. The formal design process of the Santa Cruz campus began in the late 1950s, culminating in the Long Range Development Plan of 1963. Construction had started by 1964, and the University was able to accommodate its first students (albeit living in trailers on what is now the East Field athletic area) in 1965. The campus was intended to be a showcase for contemporary architecture, progressive teaching methods, and undergraduate research. According to founding chancellor Dean McHenry, the purpose of the distributed college system was to combine the benefits of a major research university with the intimacy of a smaller college. UC President Clark Kerr shared a passion with former Stanford roommate McHenry to build a university modeled as "several Swarthmores" (i.e., small liberal arts colleges) in close proximity to each other. Roads on campus were named after UC Regents who voted in favor of building the campus.

FULL ARTICLE AT WIKIPEDIA.ORG
This article is licensed under the GNU Free Documentation License.
It uses material from the Wikipedia article "UC Santa Cruz."
Back to Article
/