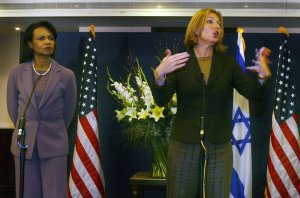 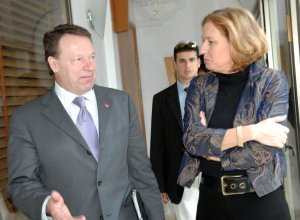 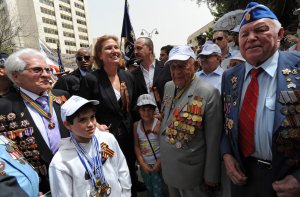 World News // 5 years ago
Defense Secretary Ashton Carter seeks to calm Israel after Iran deal
U.S. Secretary of Defense Ashton Carter is on a tour of the Middle East to reassure allies after the nuclear agreement with Iran.

I will sit in a government set as I dictate, according to the ideology of Kadima. Anyone who wants can join this way

My opinion on this matter is clear; every attack must be met with a response

Israel has acted, is acting, and will continue to act only according to its calculations, in the interest of the security of its citizens and its right to self defense

I can understand the desire of the international community to see the region calm. This is our dream as well

Tzipporah Malkah "Tzipi" Livni (Hebrew: ציפורה מלכה "ציפי" לבני‎, born 8 July 1958) is an Israeli lawyer and politician. She is the current Israeli Opposition Leader and leader of Kadima, the largest party in the Knesset. Raised an ardent nationalist, Livni has become one of her nation's leading voices for the two-state solution. In Israel she has earned a reputation as honest, clean, and sticking to her principles. She is the first woman to be leader of the opposition in Israel. In 2011 Livni was named one of "150 Women Who Shake the World" by Newsweek and The Daily Beast.

Born in Tel Aviv, Livni is the daughter of Eitan Livni (born in Poland) and Sara Rosenberg, both prominent former Irgun members. Her father served as the chief operations officer of the Irgun.

Tzipi Livni served as a lieutenant in the Israel Defense Forces (IDF). According to an interview in Yediot Aharonot, described in The Sunday Times, she served in the elite Mossad unit responsible for Operation Wrath of God (also known as Bayonet) in the 1980s. She resigned from the IDF in August 1983 to marry and finish her law studies.

FULL ARTICLE AT WIKIPEDIA.ORG
This article is licensed under the GNU Free Documentation License.
It uses material from the Wikipedia article "Tzipi Livni."
Back to Article
/