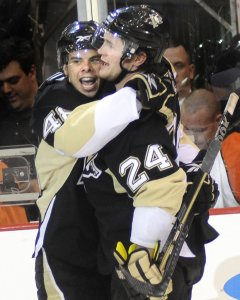 Kennedy was drafted by the Pittsburgh Penguins in the 4th round, 99th overall of the 2004 NHL Entry Draft. After being drafted, Kennedy played two seasons with Sault Ste. Marie Greyhounds of the OHL. He began playing for the AHL Wilkes-Barre/Scranton Penguins in AHL. He played his first game in the NHL on October 27, 2007, in a match versus the Montreal Canadiens. He scored his first NHL goal on November 3, 2007 against the New York Islanders. Kennedy is most commonly known among Penguin fans for his energy on the ice, making hits and going hard along the boards. He is also known for scoring at sharp and inopportune angles. His mentor was Gary Roberts.

Kennedy was named to the NHL's YoungStars Team in 2008 along with fellow teammate, Kris Letang. Kennedy was unable to compete in the game because of mononucleosis. In September 2008, the Penguins signed an agreement with Kennedy through the 2010–11 season.

FULL ARTICLE AT WIKIPEDIA.ORG
This article is licensed under the GNU Free Documentation License.
It uses material from the Wikipedia article "Tyler Kennedy."
Back to Article
/