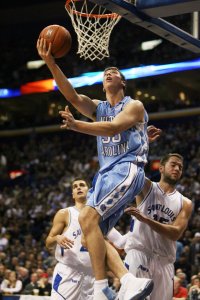 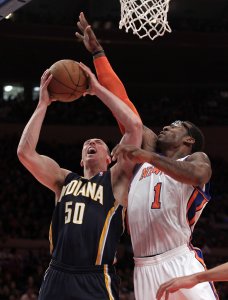 College Basketball // 2 years ago
No. 12 UNC Tar Heels face Syracuse Orange in ACC tournament
No. 12 North Carolina takes on Syracuse in the second round of the Atlantic Coast Conference Tournament on Wednesday at the Barclays Center in Brooklyn. 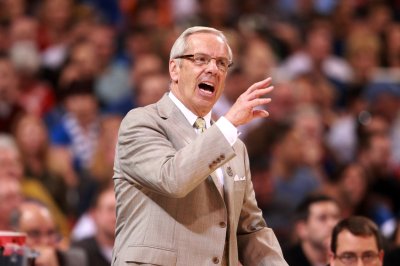 NBA // 4 years ago
Jeremy Lin opts out of deal with Charlotte Hornets
Hornets guard Jeremy Lin declined the $2.2 million team option to return to Charlotte next season and will become a free agent on July 1.

Sports News // 4 years ago
North Carolina advances to Final Four
PHILADELPHIA -- North Carolina's players and coach knew they were the last of the big dogs remaining.

Andrew Tyler Hansbrough (born November 3, 1985 in Columbia, Missouri) is an American basketball player for the Indiana Pacers. Hansbrough completed a college basketball career with the North Carolina Tar Heels men's basketball team in 2009, and was drafted into the NBA by the Indiana Pacers with the 13th pick of the 1st round of the 2009 NBA Draft. Hansbrough was a unanimous selection for the 2006, 2007, 2008 and 2009 Atlantic Coast Conference All Conference Team, 2006 ACC Freshman of the Year, and 2008 ACC Player of the Year. He is the ACC's all-time leading scorer. In 2008, he won the Wooden Award and was the National Player of the Year. His jersey (number 50) was retired on February 10, 2010 during a Duke-North Carolina rivalry game.

Hansbrough attended Poplar Bluff High School in Poplar Bluff, Missouri and led the Mules to consecutive Missouri state championships. (Missouri State High School Activities Association) Class 5 for the 2003–2004 and 2004–2005 seasons. In 2005, Hansbrough helped Poplar Bluff beat the then undefeated and number one team in the nation, Vashon High School. While in high school he made the Missouri All-State team twice and averaged 28.2 points and 13.4 rebounds per game as a senior. Due to his growing popularity, ESPN featured a high school game on ESPN2 in which Hansbrough's Mules were beaten 56–40 by Greg Oden and his Lawrence North High School team out of Indianapolis, IN. Hansbrough accepted an offer to play basketball for North Carolina, turning down scholarship offers to play at Duke, Florida, Missouri, Kansas and Kentucky.

Tyler Hansbrough led the University of North Carolina men's basketball team in scoring with an average of 18.9 points per game. Additionally, Hansbrough was unanimously selected as the 2006 ACC Freshman of the Year and was also a unanimous selection to the 2006 All ACC 1st Team. This marked the first time that a freshman had ever been unanimously given 1st team All-ACC honors. He was second to J. J. Redick in voting for the ACC Player of the Year award. Hansbrough’s best game as a freshman came on February 15, 2006 when he scored 40 points in a home game against Georgia Tech. This mark set the record for most points ever scored by a freshman in a game in ACC history and for the most points scored in the Dean Smith Center (the previous high had been 38 points by Joseph Forte in 2000 vs. Tulsa).

FULL ARTICLE AT WIKIPEDIA.ORG
This article is licensed under the GNU Free Documentation License.
It uses material from the Wikipedia article "Tyler Hansbrough."
Back to Article
/