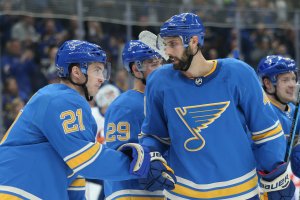 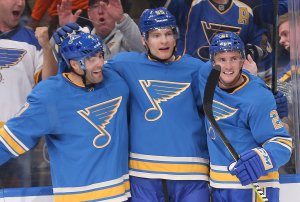 Sports News // 2 years ago
Cowboys' Ezekiel Elliott comforts boy hit by puck during Stanley Cup Playoffs
Dallas Cowboys running back Ezekiel Elliott helped a young fan smile after he was hit by a puck during the Dallas Stars' playoffs loss to the St. Louis Blues.

NHL // 3 years ago
Golden Knights, Blues face off in search of lift
St. Louis is singing the blues coming into Las Vegas on Friday night to face the Golden Knights off a 1-0 loss to a Chicago Blackhawks team that had lost eight straight games while Vegas looked golden again in a 5-0 rout of Anaheim.

Tyler Bozak (born March 19, 1986) is a Canadian ice hockey centre currently playing for the Toronto Maple Leafs of the National Hockey League (NHL). Bozak has also played for the Toronto Marlies of the American Hockey League. Prior to being signed by the Maple Leafs as a free agent, Bozak had played two seasons with the University of Denver Pioneers of the National Collegiate Athletic Association (NCAA).

Bozak started playing in the British Columbia Hockey League (BCHL) for the Victoria Salsa (later known as the Victoria Grizzlies) in the 2004–05 season. He spent three seasons in the BCHL with the Victoria franchise. In his final season, Bozak recorded 128 points (45 goals and 83 assists), and was awarded the Brett Hull Trophy as the league's Top Scorer.

On December 11, 2006, the University of Denver Pioneers announced that Bozak had signed a letter of intent to play hockey for the school. He joined the Pioneers for the 2007–08 season. During his freshman year with the club, Bozak played in all 41 games and led the team in scoring with 34 points (18 goals and 16 assists). He was second in the country with five shorthanded goals. During the season, Bozak was named the Red Baron Western Collegiate Hockey Association (WCHA) Rookie of the Week four times and was named the Hockey Commissioner's Association (HCA) Rookie of the Month for December. At the end of the season, Bozak was named to the All-WCHA third team and to the All-WCHA Rookie Team.

FULL ARTICLE AT WIKIPEDIA.ORG
This article is licensed under the GNU Free Documentation License.
It uses material from the Wikipedia article "Tyler Bozak."