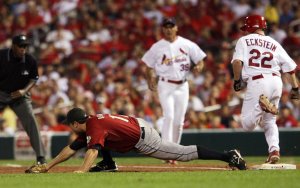 Ty Allen Wigginton (born October 11, 1977 in San Diego, California) is a Major League Baseball third baseman, who is currently with the Colorado Rockies. He is known as a utility player, having platooned as an infielder and an outfielder during his career. He bats and throws right-handed. Wigginton resides in Chula Vista, California.

FULL ARTICLE AT WIKIPEDIA.ORG
This article is licensed under the GNU Free Documentation License.
It uses material from the Wikipedia article "Ty Wigginton."
Back to Article
/