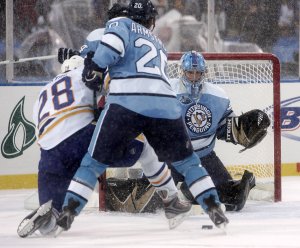 Ty Curtis Conklin (born March 30, 1976) is an American professional ice hockey goaltender, currently an unrestricted free agent of the National Hockey League. Conkin has been in three different finals appearances with three different teams, though he has not won a Stanley Cup.

Raised – although not born – in Anchorage, Alaska and an early recruit and graduate of the now-famed Minnesota hockey prep school Shattuck-St. Mary's, he later played in the United States Hockey League (USHL) for the Green Bay Gamblers, under Don Granato, and then in the NCAA for long-tenured coach Dick Umile as a member of the University of New Hampshire – or UNH – Wildcats.

A self-described "late-bloomer", and "shorter kid" at age 18, while spending his draft-eligible years (to age 20) remaining off the radar of professional scouts – first as a post-graduate at Shattuck, and then in his first year in Green Bay – Conklin went unclaimed by any team in the NHL's Entry Draft.

FULL ARTICLE AT WIKIPEDIA.ORG
This article is licensed under the GNU Free Documentation License.
It uses material from the Wikipedia article "Ty Conklin."
Back to Article
/