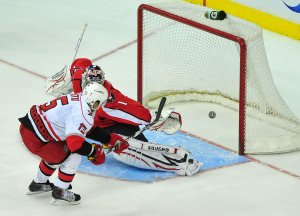 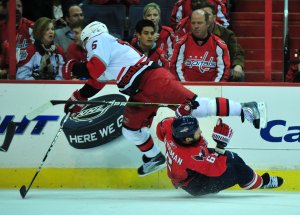 Sports News // 5 years ago
Florida Panthers get big December win over New Jersey Devils
NEWARK, N.J. -- With more than half the season remaining, this was hardly a must-win game for the Florida Panthers.

Tuomo Iisakki Ruutu (born February 16, 1983) is a Finnish professional ice hockey forward who plays for the Carolina Hurricanes of the National Hockey League. He is the brother of Jarkko Ruutu, also currently playing in the NHL, and retired player Mikko Ruutu.

Ruutu started out playing for HIFK in the Finnish SM-liiga in the 1999–00 season, and moved to Jokerit for the next two seasons. In 2002 he returned to HIFK for one more season. Ruutu was drafted by the Chicago Blackhawks in the 2001 NHL Entry Draft, as their first-round pick, #9 overall. He crossed the Atlantic in 2003, playing a full 82 games with the Blackhawks in the 2003–04 NHL season.

He did not play during the NHL lockout, as he was recovering from injuries, but provided commentary on Finnish television during the ice hockey world championships, along with fellow NHL player Ville Nieminen. Ruutu returned to the NHL after the lockout, but his 2005–06 NHL season was cut short, first by a back injury that kept him out of the game for most of the fall, and in January an ankle injury requiring surgery ended his season.

FULL ARTICLE AT WIKIPEDIA.ORG
This article is licensed under the GNU Free Documentation License.
It uses material from the Wikipedia article "Tuomo Ruutu."