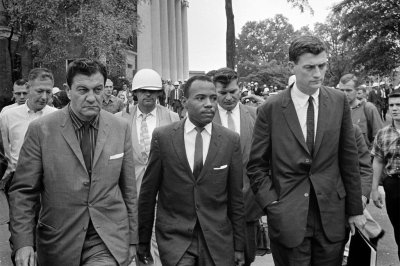 Top News // 3 years ago
The Almanac
On Sept. 30, 1962, James Meredith, an African American, was escorted onto the University of Mississippi campus by U.S. marshals, setting off a riot.

Entertainment News // 5 years ago
Joanne Carson, Johnny's second ex-wife, dead at 84
Joanne Carson, the ex-wife of comedy icon Johnny Carson and the longtime confidant of writer Truman Capote, has died under hospice care at home. She was 84.

Truman Capote (pronounced /ˈtruːmən kəˈpoʊti/; September 30, 1924 – August 25, 1984) was an American author, many of whose short stories, novels, plays and nonfiction are recognized literary classics, including the novella Breakfast at Tiffany's (1958) and In Cold Blood (1965), which he labeled a "nonfiction novel." At least 20 films and television dramas have been produced from Capote novels, stories and screenplays.

Capote rose above a childhood troubled by divorce, a long absence from his mother and multiple migrations. He discovered his calling by the age of eleven, and for the rest of his childhood he honed his writing ability. Capote began his professional career writing short stories. The critical success of one story, "Miriam" (1945), attracted the attention of Random House publisher Bennett Cerf, resulting in a contract to write Other Voices, Other Rooms (1948). Capote earned the most fame with In Cold Blood (1965), a journalistic work about the murder of a Kansas farm family in their home, a book Capote spent four years writing. A milestone in popular culture, it was the peak of his career, although it was not his final book. In the 1970s, he maintained his celebrity status by appearing on television talk shows.

Born Truman Streckfus Persons in New Orleans, Louisiana, the son of 17-year-old Lillie Mae Faulk and salesman Archulus Persons. His parents divorced when he was four, and he was sent to Monroeville, Alabama, where, for the following four to five years, he was raised by his mother's relatives. He formed a fast bond with his mother's distant relative, Nanny Rumbley Faulk, whom Truman called "Sook". "Her face is remarkable—not unlike Lincoln's, craggy like that, and tinted by sun and wind," is how Capote described Sook in "A Christmas Memory". In Monroeville, he was a neighbor and friend of author Harper Lee, who wrote the 1960 novel To Kill a Mockingbird, with the character Dill being based on Capote.

FULL ARTICLE AT WIKIPEDIA.ORG
This article is licensed under the GNU Free Documentation License.
It uses material from the Wikipedia article "Truman Capote."
Back to Article
/