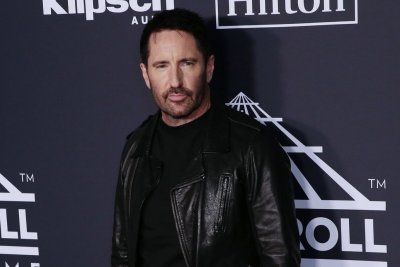 There is no agenda here other than for you to explore, experiment and have fun with it

I wasn't paying attention. I trusted somebody. It's as simple as that

Michael Trent Reznor (born May 17, 1965) is an American songwriter, producer, and multi-instrumentalist and founder of the industrial rock musical project known as Nine Inch Nails; he was previously associated with the bands Option 30, Exotic Birds, and Tapeworm, among others. As of 2007, Reznor split his ties with Interscope Records, and is now an independent, unsigned musician. He is one of the most acclaimed creative figures of his generation of music.

Reznor's first release as Nine Inch Nails, Pretty Hate Machine, was a commercial success, and he has released several major albums and singles since then. He has worked with David Bowie, Adrian Belew, Saul Williams, and Marilyn Manson (considered by some to be Reznor's protégé). In 1997, Reznor appeared in Time magazine's list of the year's most influential Americans, and Spin magazine described him as "the most vital artist in music."

Michael Trent Reznor was born in Mercer, Pennsylvania, halfway between Pittsburgh and Erie, to Michael Joseph Reznor and Nancy Lou Clark. Reznor was referred to by his middle name to avoid confusion with his father. After his parents divorced, he lived with his grandparents, while his sister Tera lived with their mother. Reznor is a direct descendant of George Reznor, founder of the Reznor Company (founded 1888), a heating and air conditioning company. The family sold the business in the 1960s.

FULL ARTICLE AT WIKIPEDIA.ORG
This article is licensed under the GNU Free Documentation License.
It uses material from the Wikipedia article "Trent Reznor."
Back to Article
/