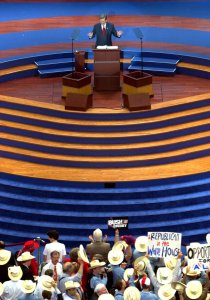 I think it is territory that tends to unite us more

There is a thing called executive privilege. I do think

You get out of Washington, you get relaxed, you let your hair down. And that's dangerous

I went from being the most vocal, Johnny-on-the-spot senator to a shadow avoiding the media as I tried to establish a new congressional persona

On December 20, 2002, after significant controversy following what were viewed by some as racially insensitive comments, and by others as respectful comments that did not reference race, regarding Strom Thurmond's presidential candidacy, Lott resigned as Senate Minority Leader in the Senate. In December 2007, he resigned from the Senate entirely and became a Washington-based lobbyist. Lott ruled out any health concerns affecting his resignation. At a press conference on December 31, 2007, Mississippi Governor Haley Barbour appointed Roger Wicker to fill temporarily the Senate seat vacated by Lott. On November 4, 2008, a special election Senate race was held to replace him. The election was won by Republican Roger Wicker.

Lott was born in Grenada, Mississippi. His father, Chester Paul Lott, was a shipyard worker; his mother, Iona Watson, was a schoolteacher. He attended college at the University of Mississippi in Oxford, where he obtained an undergraduate degree in public administration in 1963 and a law degree in 1967. He served as a Field Representative for Ole Miss and was president of his fraternity, Sigma Nu. Lott was also an Ole Miss cheerleader, coincidentally on the same team with U.S. Senator Thad Cochran. He married Patricia Thompson on December 27, 1964. The couple has two children: Chester Trent "Chet" Lott, Jr., and Tyler Lott.

FULL ARTICLE AT WIKIPEDIA.ORG
This article is licensed under the GNU Free Documentation License.
It uses material from the Wikipedia article "Trent Lott."
Back to Article
/