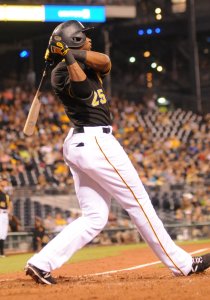 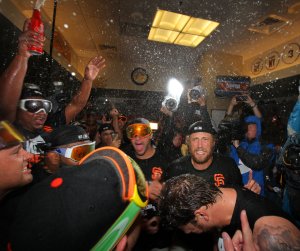 Sports News // 6 years ago
Rain delays no problem for Pittsburgh Pirates vs. New York Mets
NEW YORK -- The score was tied and the New York Mets had two runners on with one out in the sixth inning Sunday afternoon when thunderstorms arrived at Citi Field.

Sports News // 6 years ago
Seven-run first sends Pittsburgh Pirates past St. Louis Cardinals
ST. LOUIS -- Pedro Alvarez swears he does nothing different when swinging a bat in Busch Stadium than he does in any other ballpark.

Sports News // 6 years ago
Washington Nationals complete sweep of slumping San Francisco Giants
WASHINGTON -- Jordan Zimmermann is not a .500 pitcher, and after a sluggish start, he is finally starting to put together the efforts that elevated him into the National League's elite.
Sports News // 7 years ago
Bumgarner, Giants win NLCS opener
Madison Bumgarner is proving to be unbeatable on the road in the postseason.
Sports News // 8 years ago
Pittsburgh Pirates top the Chicago Cubs 7-6
The Pittsburgh Pirates top the Chicago Cubs, 7-6, in the opener of a three-game set at Wrigley Field.

Travis Takashi Ishikawa (Japanese name: 石川 隆 Ishikawa Takashi) (born September 24, 1983 in Seattle, Washington) is a first baseman for the San Francisco Giants. He is hapa Yonsei (fourth-generation American of Japanese ancestry). His father is Sansei and his mother is Caucasian. Ishikawa made his major league debut on April 18, 2006, against the Arizona Diamondbacks. He is married, and has a son and a daughter.

Ishikawa attended Federal Way High School in Federal Way, Washington, where he lettered in baseball, leading his team to the Washington State Class 4A Title as a junior and to the title game as a senior.

Ishikawa made his major league debut from Single-A with three brief stints (April 17–20, May 25–30, and June 13–20). He was recalled for the 1st time on April 17 when Lance Niekro was placed on the Bereavement List, and made his major league debut April 18 at Arizona. His first big league hit was on April 19 as a single off Arizona Diamondbacks' Brandon Webb. He had his first big league start on May 26 against the Colorado Rockies, going 3-for-4 with 2 doubles and 3 RBIs. He played for the Scottsdale Scorpions in the Arizona Fall League.

FULL ARTICLE AT WIKIPEDIA.ORG
This article is licensed under the GNU Free Documentation License.
It uses material from the Wikipedia article "Travis Ishikawa."