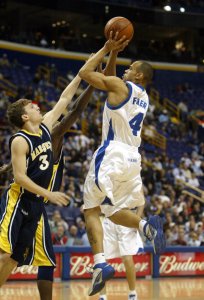 We knew they weren't going to go away, they're all tough kids mentally and physically

Diener played collegiately at Marquette University, and was a member of the Golden Eagles team that reached the NCAA Tournament Final Four in 2003. That Golden Eagles team had three future NBA players, including Diener, Dwyane Wade and Steve Novak.

Following his college career at Marquette, he was a second-round draft choice (38th overall) of the Orlando Magic in the 2005 NBA Draft. His selection by the Magic mystified some critics, who argued that the team was overloading on point guards, already having Steve Francis and Jameer Nelson on their roster.

FULL ARTICLE AT WIKIPEDIA.ORG
This article is licensed under the GNU Free Documentation License.
It uses material from the Wikipedia article "Travis Diener."
Back to Article
/