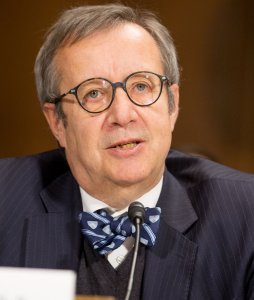 U.S. News // 3 years ago
List of current, former leaders set to attend Bush funeral
President Donald Trump will be joined Wednesday by a number of notable world leaders and figures for the state funeral of president George H.W. Bush at the National Cathedral.

World News // 7 years ago
Russian propaganda video: 'I am a bloodthirsty monster'
An independently made video extolling Russian imperialism, "I, Occupier," has been viewed 3 million times on YouTube.
World News // 7 years ago
In Estonia, Obama reassures Baltic countries
President Barack Obama, speaking Wednesday in Tallinn, Estonia, reassured Baltic allies and other NATO countries of the United States' unwavering support.
U.S. News // 8 years ago
Obama schedule for Friday, Aug. 30
President Obama meets with the presidents of Estonia, Lithuania and Latvia Friday to discuss their two decades of independence, the White House said.
Odd News // 9 years ago
Estonian pres. Twitter feud goes musical
A Latvian-born composer said an Estonian orchestra will perform a piece based on the Estonian president's Twitter dispute with economist Paul Krugman.
World News // 1 decade ago
Bush to be honored by Estonia
Former U.S. President George W. Bush will be awarded the Order of the Cross of Terra Mariana by Estonian President Toomas Hendrik Ilves.
Special Reports // 1 decade ago
Estonia, Lithuania vow energy security
Regional cooperation between the Baltic states on energy security and other issues is deepening, the presidents of Lithuania and Estonia say.
World News // 1 decade ago
Proposed Estonian newspaper law criticized
A proposed law requiring journalists in Estonia to reveal their sources has come under criticism from the World Association of Newspapers.
World News // 1 decade ago
Another candidate for EU post
Estonian President Toomas Hendrik Ilves says he is a candidate for one of the new European Union posts created under the Lisbon Treaty.

When can we take a high-speed train from Estonia, through Latvia and Lithuania, to Berlin

Biden suspends tariffs on Ukraine steel for one year

Toomas Hendrik Ilves (Estonian pronunciation: ; born 26 December 1953) is the fourth and current President of Estonia. He is a former diplomat and journalist, was the leader of the Social Democratic Party in the 1990s and later a member of the European Parliament. He was elected to the post by an electoral college on 23 September 2006 and his term as President began on 9 October 2006.

Ilves was born in Stockholm, Sweden; his parents were Estonian refugees. He grew up in the United States and graduated from Leonia High School in Leonia, New Jersey in 1972 as valedictorian. He received a bachelor's degree in psychology from Columbia University in 1976 and a master's degree in the same subject from the University of Pennsylvania in 1978.

During the 1980s, Ilves worked as a journalist for Radio Free Europe and became actively involved in politics prior to Estonia's independence in 1991. Ilves subsequently became Ambassador of Estonia to the United States in 1993; he also served as Ambassador to Canada and Mexico for several years.

FULL ARTICLE AT WIKIPEDIA.ORG
This article is licensed under the GNU Free Documentation License.
It uses material from the Wikipedia article "Toomas Hendrik Ilves."