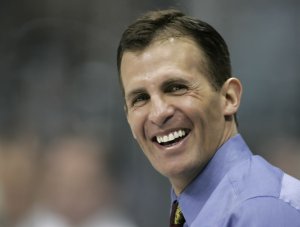 I thought we were ready to go, but obviously, we came out flat and (Minnesota) was able to take advantage of it

Following a college career at the University of Wisconsin-Madison, Granato was drafted by the New York Rangers in the sixth round (120th overall) in the 1982 NHL Entry Draft. He has played for the New York Rangers, Los Angeles Kings and San Jose Sharks. In February 1994, Granato was suspended by the NHL for 15 games after he slashed Chicago's Neil Wilkinson in the head during a game in Los Angeles. As of 2005 this was the 7th longest suspension in NHL history. In 1997, while with the Sharks, Granato received the Bill Masterton Memorial Trophy.

Granato joined the Colorado Avalanche as an assistant coach prior to the 2002–03 season. After a sub-par start to the season, the Avalanche fired head coach Bob Hartley on December 18, 2002 and Granato was subsequently promoted to permanent head coach. Despite the slow start under Hartley, the Avalanche went 32–11–8 under Granato and earned a playoff spot. However, they lost in the first round of the 2003 playoffs to the Minnesota Wild in 7 games. In his first full season behind the bench, Granato led Colorado to an impressive 40–22–20 record. After defeating the Dallas Stars in 5 games, the Avalanche lost to San Jose in 6.

FULL ARTICLE AT WIKIPEDIA.ORG
This article is licensed under the GNU Free Documentation License.
It uses material from the Wikipedia article "Tony Granato."
Back to Article
/