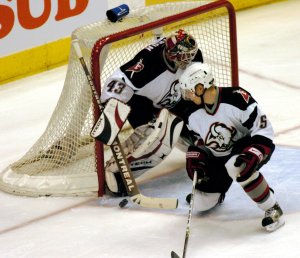 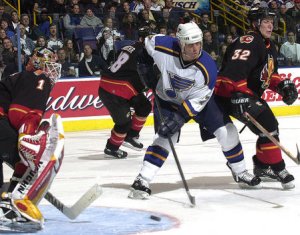 Toni Lydman (born September 25, 1977) is a Finnish professional ice hockey defenceman with the Anaheim Ducks of the National Hockey League. He has previously played for the Buffalo Sabres, Calgary Flames, Tappara (Sm-liiga), and HIFK (SM-liiga). He lives with his wife Heta and his two daughters, Amanda and Ellen.

Lydman was drafted by Calgary in the fourth round, 89th overall at the 1996 NHL Entry Draft. He spent four seasons playing in Finland's SM-liiga for Tappara in Tampere and HIFK in Helsinki before making his NHL debut for the Flames in the 2000–01 NHL season.

His best season came in 2001-02, when he scored 28 points on 6 goals and 22 assists, tying for fifth for his team in assists and sixth in points scoring. In the 2002–03 NHL season, Lydman led his defense in points with 26 and managed to remain injury-free the whole season, only missing one game due to illness. Calgary made it to the Stanley Cup finals in the 2003–04 NHL season, but Lydman missed most of their playoff campaign due to injury. During the 2004–05 NHL lockout, which wiped out the entire 2004–05 NHL season, Lydman returned to Helsinki for HIFK but only managed to play eight games.

FULL ARTICLE AT WIKIPEDIA.ORG
This article is licensed under the GNU Free Documentation License.
It uses material from the Wikipedia article "Toni Lydman."
Back to Article
/