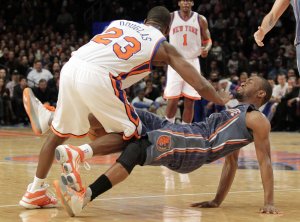 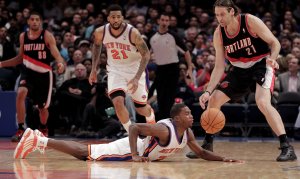 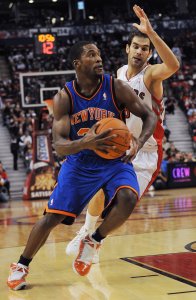 NBA // 4 years ago
Brooklyn Nets blow past Memphis Grizzlies in fourth quarter
MEMPHIS, Tenn. -- After the Brooklyn Nets had gotten just about whatever they wanted on the offensive end and defeated the Memphis Grizzlies 122-109 on Monday night at FedExForum, guard Sean Kilpatrick (23 points) called Memphis a "great defensive team."

NBA // 5 years ago
NBA roundup: recap, scores, notes for every game played on December 8
NEW ORLEANS -- Dario Saric scored eight consecutive points in a decisive fourth-quarter surge and Ersan Ilyasova had a team-high 23 points as the Philadelphia 76ers snapped a 23-game road losing streak with a 99-88 victory over the New Orleans Pelicans Thursday night at the Smoothie King Center.

Sports News // 5 years ago
Miami Heat hold on to defeat New Orleans Pelicans
NEW ORLEANS -- The Miami Heat have made a practice of keeping their composure in games against weaker opponents.

Toney Bernard Douglas (born March 16, 1986) is an American professional basketball player who plays for the New York Knicks of the National Basketball Association (NBA). Born in Jonesboro, Georgia, he attended Jonesboro High School, where he was a starter and top player on the basketball team for three years.

Douglas played college basketball at Auburn for one year, and became frustrated with his role on the team as a shooting guard. Douglas transferred to the Florida State University for the remainder of his collegiate career, where he switched to the point guard position—after forgoing eligibility for a season because of college basketball transfer regulations. In his sophomore season, Douglas initially struggled in his transition to a new team and position, but soon resumed a high level of play, overcoming a hand injury in the middle of the season. He emerged as a defensive force in his junior season, setting school and conference records for steals. Douglas stepped up as a team leader in his final season; he broke personal records in several statistical categories and helped lead the Seminoles to their first National Collegiate Athletic Association (NCAA) tournament in 11 years.

Drafted by the Los Angeles Lakers in the 2009 National Basketball Association (NBA) Draft with the 29th overall pick, Douglas was traded to the New York Knicks for their 2011 second-round pick and $3 million in cash considerations.

FULL ARTICLE AT WIKIPEDIA.ORG
This article is licensed under the GNU Free Documentation License.
It uses material from the Wikipedia article "Toney Douglas."