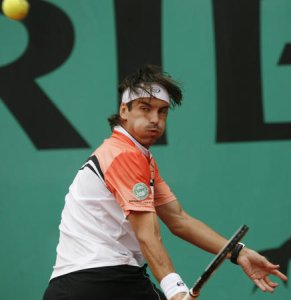 Sports News // 5 years ago
Hot Murray moves on at French Open
No. 3 seed Andy Murray was an easy opening-round winner Monday at the 2015 French Open.

It's great to play at home and I got great crowd support today. I'm quite tired as it was very tough match but hopefully I can recover for the semifinals

Tommy Robredo Garcés (born 1 May 1982 in Hostalric, Girona) is a Spanish professional tennis player. On 8 May 2006, he broke into the world's top ten for the first time. His highest singles ranking to date is No. 5, which he first reached on 28 August 2006 soon after winning the Hamburg Masters.

He turned professional in 1998 and was coached by José Manuel "Pepo" Clavet and is now coached by Karim Perona. Robredo considers his forehand to be his best shot, and red clay is his favorite surface.

Robredo began playing tennis regularly when he was five and his family moved to Olot, where his father Ángel became the director of the local tennis club, Club Natació Olot. (Robredo's mother Dolores is herself a former assistant coach.) He was coached by his father until 1996 when he joined the Spanish Tennis Federation at the Centre d'Alt Rendiment ("High Performance Center"), a famous center for professional sports training in Sant Cugat del Vallès. He turned professional in 1998.

FULL ARTICLE AT WIKIPEDIA.ORG
This article is licensed under the GNU Free Documentation License.
It uses material from the Wikipedia article "Tommy Robredo."
Back to Article
/