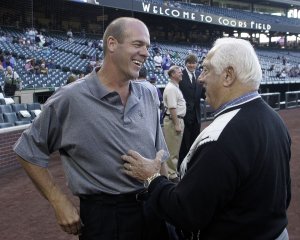 MLB // 1 year ago
Angels aim to get Mike Scioscia milestone win vs. Tigers
Mike Scioscia hopes the third time is the charm for his 1,600th career managerial victory.

Sports News // 2 years ago
Los Angeles Dodgers unveil Jackie Robinson statue on 70th anniversary of debut
On a day when Major League Baseball honored the anniversary of the day that Jackie Robinson broke the color barrier, the Los Angeles Dodgers paid homage to the first black player by unveiling an 800-pound bronze statue depicting Robinson as a rookie sliding into home plate.

Sports News // 3 years ago
Ken Griffey Jr., Mike Piazza emotional during Hall of Fame induction speeches
COOPERSTOWN, N.Y. -- Ken Griffey Jr. is a 46-year-old father of three who is a couple decades removed from playing baseball with a youthful swagger.

MLB // 3 years ago
Ken Griffey Jr., Mike Piazza took opposite Cooperstown paths
No Hall of Famer ever began his career with the pomp and circumstance of Ken Griffey Jr., who was selected by the Seattle Mariners with the first overall pick in the 1987 draft and reached the major leagues for good after just 129 minor league games.

Top News // 4 years ago
The Almanac
In 1975, U.S. President Gerald Ford escaped a second assassination attempt in 17 days, both in California.

I'm not going to go. They made a big thing out of it

Thomas Charles Lasorda (born September 22, 1927 in Norristown, Pennsylvania) is a former Major League baseball pitcher and manager. 2009 marks his sixth decade in one capacity or another with the Brooklyn/Los Angeles Dodgers organization, the longest non-continuous (he played one season with the Kansas City Athletics) tenure anyone has had with the team, edging Dodger broadcaster Vin Scully by a single season.

FULL ARTICLE AT WIKIPEDIA.ORG
This article is licensed under the GNU Free Documentation License.
It uses material from the Wikipedia article "Tommy Lasorda."
Back to Article
/