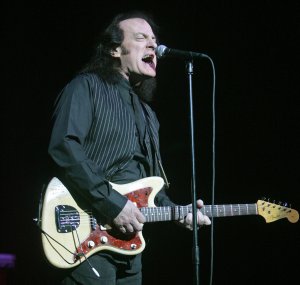 Top News // 3 months ago
The Almanac
On April 29, 1992, rioting erupted in Los Angeles after a jury acquitted four white police officers of nearly all charges in the beating of Rodney King.

Top News // 5 years ago
The Almanac
On April 29, 1975, helicopters evacuated hundreds of U.S. civilians and military support personnel, and thousands of South Vietnamese from Saigon.

Top News // 6 years ago
The Almanac
On April 29, 1975, air assets from the U.S. evacuated hundreds of American civilians and military personnel, and thousands of South Vietnamese from Saigon.

Born in Dayton, Ohio, Tommy and his family moved to Niles, Michigan; a child model at age four, he was no stranger to the stage. In 1959, at the age of twelve, James formed what would be recognized as his first official band "The Tornadoes". A year later the band changed its name to The Shondells. By 1964, Jack Douglas, a local DJ at WNIL radio station in Niles formed his own record label, Snap Records. The Shondells were one of the local bands he recorded at WNIL studios. One of the songs was the Jeff Barry and Ellie Greenwich ditty "Hanky Panky", which the pair recorded using the name The Raindrops. The song was a hit locally, but the label had no resources for national promotion and it was soon forgotten.

In 1965, a local dance promoter, Bob Mack, started playing the song at his Pittsburgh dance clubs, having found a copy of it in a used record bin. Soon after, a Pittsburgh area bootlegger made a copy of the song and began pressing copies of it, speeding it up slightly in the process. Sales of the bootleg were estimated at 80,000 in ten days. It became number one on Pittsburgh radio stations in early 1966. Disk jockey Jack Douglas was the first to hear about the record's sudden popularity in Pittsburgh; his Snap Records labels always included his name and location. Further calls from Pittsburgh convinced James to come to Pennsylvania, where he met with Mack and Chuck Rubin, who handled the talent bookings for Mack's dance clubs. Before long, all three major music trade papers, Billboard, Cashbox and Record World, were listing "Hanky Panky" as a regional breakout hit. Rubin, who had music industry connections, said it was a good time for the trio to travel to New York in search of a record deal.

FULL ARTICLE AT WIKIPEDIA.ORG
This article is licensed under the GNU Free Documentation License.
It uses material from the Wikipedia article "Tommy James."