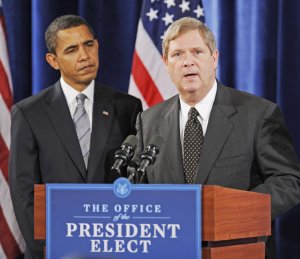 U.S. News // 4 years ago
Choices narrow as Clinton, Trump near end of VP vetting process
The vetting process for potential running mates is nearing its conclusion for Hillary Clinton and Donald Trump as they move toward picking a vice president.

U.S. News // 4 years ago
Perfect storm brewing for California fire season
California's climate has always been hospitable to fire. But add years of drought, a bark beetle blight and rising temperatures, and it's a recipe for disaster.

U.S. News // 4 years ago
2015 Dietary Guidelines near completion
Secretaries Sylvia Burwell of the Department of Health and Human Services and Tom Vilsack of the U.S. Department of Agriculture addressed concerns of lawmakers Wednesday in testimony before the House Agriculture Committee.

More and more, busy American families want nutrition information that they can quickly and easily understand

Since taking office, the president has clearly articulated the goal to ensure a cleaner, safer and more secure energy future

Thomas James "Tom" Vilsack (pronounced /ˈvɪlsæk/; born December 12, 1950) is an American politician, a member of the Democratic Party, and presently the U.S. Secretary of Agriculture. He served as the 40th Governor of the state of Iowa. He was first elected in 1998 and re-elected to a second four-year term in 2002. On November 30, 2006, he formally launched his candidacy for the Democratic Party's nomination for President of the United States in the 2008 election, but ended his bid on February 23, 2007.

Born in Pittsburgh, Pennsylvania, Tom Vilsack was abandoned at birth and placed in a Roman Catholic orphanage. He was adopted in 1951 by Bud and Dolly Vilsack, who raised him in the Roman Catholic faith. His adoptive father was a real-estate agent and insurance salesman, and his adoptive mother was a homemaker.

FULL ARTICLE AT WIKIPEDIA.ORG
This article is licensed under the GNU Free Documentation License.
It uses material from the Wikipedia article "Tom Vilsack."
Back to Article
/