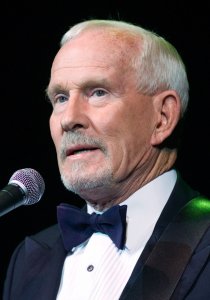 Tom Smothers (born Thomas Bolyn Smothers III on February 2, 1937) is an American comedian, composer and musician, best known as half of the musical comedy team the Smothers Brothers, alongside his younger brother Dick.

Smothers was born in New York City, the son of Ruth (née Remick), a homemaker, and Thomas B. Smothers, an army officer. After moving to California, he graduated from Redondo Union High School in Redondo Beach, California. He was a competitive unicyclist, and a state champion gymnast in the parallel bars. Smothers later attended San José State University, then known as San Jose State College. At SJSC, Smothers participated both in gymnastics and pole vault for the track team (coached by Lloyd (Bud) Winter.

The Smothers Brothers initially wanted to be folk musicians. Tom didn't feel that he was good enough to be a professional musician, but he was funny enough to do comedy. The two began adding comedy bits to their act.

FULL ARTICLE AT WIKIPEDIA.ORG
This article is licensed under the GNU Free Documentation License.
It uses material from the Wikipedia article "Tom Smothers."
Back to Article
/