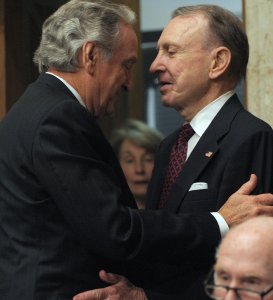 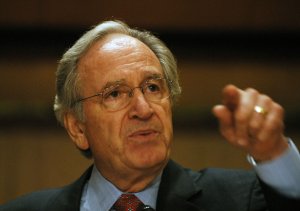 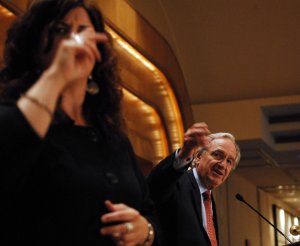 I'm hopeful that we get it done by August, but at least get it done next year before we break for Christmas

Everything is looked at from his life experiences, from always having been in the military, and I think that can be pretty dangerous

With the deficit situation we have around here, it's always easier to pass something if it's paid for

The Catholic University of America (J.D.)

Thomas Richard "Tom" Harkin (born November 19, 1939) is the junior United States Senator from Iowa and a member of the Democratic Party. Harkin is currently the most senior junior senator. First elected to the Senate in 1984, Harkin was a candidate for his party's presidential nomination in 1992, and is currently chairman of the Senate Committee on Health, Education, Labor and Pensions.

Harkin was born in Cumming, Iowa. His father, Patrick Harkin, an Irish American was a coal miner and his mother, Frances, was a Slovene immigrant who died when he was ten. He still maintains his childhood house, where he and his five siblings were raised without hot running water or a furnace. He attended Dowling Catholic High School which is currently located in West Des Moines, Iowa. Harkin attended Iowa State University on a Navy R.O.T.C. scholarship and was a member of Delta Sigma Phi fraternity. He graduated with a degree in government and economics in 1962, and served in the United States Navy as an active-duty jet pilot from 1962 to 1967. Harkin was stationed at Naval Air Facility Atsugi in Japan, where he ferried aircraft to and from the airbase that had been damaged in the Vietnam War and in operational and training accidents. He was also stationed for a time at Guantanamo Bay, where he flew missions in support of U-2 planes reconnoitering Cuba. After leaving active duty in 1967, he spent three years in the Ready Reserves, and transitioned into the Naval Reserves in 1970. He retired in 1989 with the rank of commander.

FULL ARTICLE AT WIKIPEDIA.ORG
This article is licensed under the GNU Free Documentation License.
It uses material from the Wikipedia article "Tom Harkin."
Back to Article
/