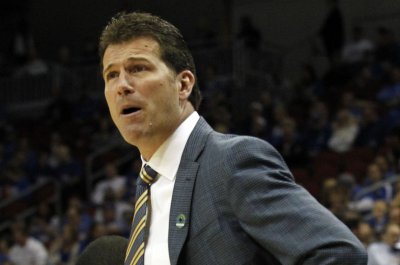 College Basketball // 3 years ago
UCLA's Steve Alford not talking Indiana Hoosiers job
UCLA basketball coach Steve Alford guided the Bruins to the Sweet 16 but before the South Region semifinal against Kentucky, media are mostly interested in talking about Indiana.

College Basketball // 3 years ago
Watch: Tom Crean getting tackled is epitome of Indiana basketball season
A hoop-and-the-harm took a different meaning Sunday, after Moritz Wagner hit a 3-pointer in Michigan's 75-63 win against Indiana in Bloomington.

It is a long-term contract, it is more than generous

Thomas Aaron "Tom" Crean (born March 25, 1966) is an American college basketball coach. He is currently the head coach of the Indiana Hoosiers men's basketball team. His previous head coaching job was at Marquette University (1999–2008), where the program had averaged 20 wins a year, won a conference championship, and made six postseason appearances, including the 2003 NCAA Final Four, the program's third appearance all-time and first since 1977.

Crean was born and raised in Mount Pleasant, Michigan, where he played basketball for four years. According to Crean, "I didn't play a lot, but I knew I wanted to coach." While a student at Central Michigan University, Crean was an assistant coach at Mount Pleasant High School for five seasons, and at Alma College. Crean received his bachelor's degree in parks and recreation from Central Michigan in 1989. Crean is married to Joani Harbaugh, who he met through a mutual friend, Ron Burns, at a gym where she was working as an aerobics instructor. Her father, Jack Harbaugh, was the head football coach at Western Kentucky University at the time Crean was an assistant basketball coach. She is also the sister of the first pair of brothers to serve as head coaches in NFL history: Baltimore Ravens head football coach John Harbaugh and San Francisco 49ers head football coach Jim Harbaugh (a former quarterback at both the University of Michigan and in the NFL). Crean and his wife have three children: Megan, Riley, and Ainsley.

Crean was hired by then head coach Jud Heathcote as a graduate assistant coach at Michigan State University during the 1989-1990 season, at the behest of then assistant coach Tom Izzo, whom Crean had befriended on the summer camp circuit. He was also a scout for two years, earning the trust of recruiting guru Bob Gibbons. That season the Spartans won the Big Ten title and advanced to the Sweet 16 in the NCAA tournament.

FULL ARTICLE AT WIKIPEDIA.ORG
This article is licensed under the GNU Free Documentation License.
It uses material from the Wikipedia article "Tom Crean."
Back to Article
/