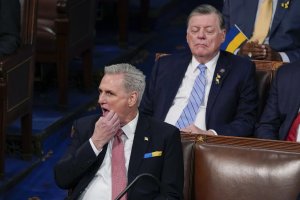 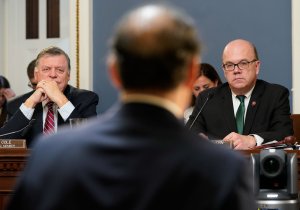 U.S. News // 7 months ago
Democrats insert debt ceiling suspension into bill avoiding gov't shutdown
Democratic leaders on Monday announced they will insert a measure raising nation's debt ceiling into a bill to fund government operations in a move likely to spark a showdown with Republicans.

U.S. News // 1 year ago
House impeaches Trump for 2nd time for inciting Capitol 'insurrection'
The House of Representatives voted Wednesday to impeach President Donald Trump on charges he incited an "insurrection" at the U.S. Capitol a week ago.

U.S. News // 2 years ago
Democrats huddle, set rules for debate before impeachment vote
The House rules committee met Tuesday to go over parameters of the voting process in the full chamber on Wednesday, where President Donald Trump is expected to become the third U.S. president to be impeached.

U.S. News // 3 years ago
Lawmakers hear from dying man, experts at first-ever Medicare for All hearing
The House rules committee on Tuesday began the first-ever hearing on the Medicare for All universal healthcare proposal, and heard from a terminally ill California man who detailed his experience in the existing system.

U.S. News // 5 years ago
Ryan, Trump warn GOP risks losing control of House if healthcare bill fails
Two days before a vote on an Obamacare replacement plan, President Donald Trump warned Republicans they could lose control of Congress if they don't approve it.

U.S. News // 5 years ago
Hillary Clinton's agenda would rely on help from the middle
A Clinton victory on Nov. 8 could revive the art of coalition-building and legislating.

Our effort is to reach out and (assure) them that we are fighting these things. But there is clearly a big fight ahead of us in the election

We are aggressively and thoroughly investigating the matter and, while we determine the details, we have terminated our relationship with a former employee who was engaged as an outside vendor

Thomas Jeffery Cole (born April 28, 1949) is the U.S. Representative for Oklahoma's 4th congressional district, serving since 2003. He is a member of the Republican Party. He is a Deputy Minority Whip. The chairman of the National Republican Congressional Committee (NRCC) from 2006 to 2008, he was, during his tenure, the fourth-ranking Republican leader in the House. As of 2010, Cole—a member of the Chickasaw Nation—is the only registered Native American in Congress.

Although born in Shreveport, Louisiana, Cole is a fifth-generation Oklahoman, having been raised in Moore, Oklahoma. He graduated from Grinnell College in 1971 with a B.A. in history. His postgraduate degrees include an M.A. from Yale University (1974) and a Ph.D. from the University of Oklahoma (1984), both in British history. Cole did research abroad as a Thomas J. Watson Fellow and was a Fulbright Fellow (1977–78) at the University of London. He was a college professor in history and politics before becoming a politician.

Following his mother Helen, who served as a state representative and senator, Cole served in the Oklahoma Senate from 1988 to 1991, resigning mid-term to accept a job in Washington. From 1995 to 1999, he was Oklahoma's Secretary of State under Governor Frank Keating, and assisted with the recovery efforts following the 1995 Oklahoma City bombing. He has also served as Chairman of the Oklahoma Republican Party.

FULL ARTICLE AT WIKIPEDIA.ORG
This article is licensed under the GNU Free Documentation License.
It uses material from the Wikipedia article "Tom Cole."