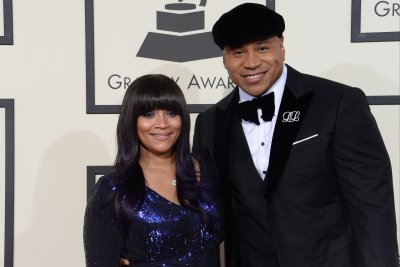 Music // 3 years ago
LL Cool J announces new album after teasing retirement
LL Cool J is set to return to the world of hip-hop with a new album he announced shortly after stating he was retiring from music altogether.

Entertainment News // 4 years ago
LL Cool J's son arrested after altercation in NY restaurant
Rapper and actor LL Cool J's son Najee Smith has been arrested after taking part in a physical altercation early Tuesday morning.
Odd News // 6 years ago
The almanac
UPI Almanac for Tuesday, Jan. 14, 2014.
U.S. News // 7 years ago
Officer denied bail in teen sex case
Bail was denied an Ohio police officer charged with attempting to engage in sex with a 15-year-old girl attending the high school he protects, officials said.
Health News // 7 years ago
Study: Injuries a failure of management
Workplace management and organizational factors play a critical role in the number of worker accidents and fatalities, U.S. researchers found.
Top News // 1 decade ago
Suspect held in Cubs clubhouse burglary
Police in Arizona don't believe a burglary suspect purposefully targeted the clubhouse at the Chicago Cubs' minor league facility in Mesa.
Top News // 1 decade ago
Man had history of conflict with council
The man police say went on a shooting spree during a council meeting in a St. Louis suburb had a history of conflict with city officials, it was reported.
Entertainment News // 1 decade ago
Stolen art found in Spielberg collection
The FBI in Los Angeles recovered a Norman Rockwell painting -- stolen more than 30 years ago -- from the collection of movie director Stephen Spielberg.
Entertainment News // 1 decade ago
Rascal Flatts hold off Keith for No. 1
Rascal Flatts' "Me and My Gang" edged out Toby Keith's "White Trash with Money" to hold onto the top spot on the Billboard 200 albums chart.
Entertainment News // 1 decade ago
Oxygen to broadcast LL Cool J concert
Cable TV's Oxygen network is working with rapper LL Cool J on a concert broadcast that will let viewers choose the songs to be performed.
Entertainment News // 1 decade ago
Lions Gate signs LL Cool J
Actor/musician LL Cool J is starring in an urban remake of the 1987 thriller "Fatal Attraction" for Lions Gate studios.
Top News // 1 decade ago
Texas campaign finance changes proposed
Sponsors of a bipartisan Texas bill say it would clarify a state law that bans the use of corporate and union money for most political purposes.

The first single is the high-intensity, Jermaine Dupri produced dance track "Control Myself", another song with singer Jennifer Lopez after their collaboration on "All I Have" on Lopez's 2002 album This Is Me... Then. LL Cool J and Jennifer Lopez shot the video for "Control Myself" on January 2 2006 at Sony Studios, New York. The video was shot by Hype Williams. Originally the song was to feature Fergie (from The Black Eyed Peas), however difference in terms of payment resulted into her being replaced by Jennifer Lopez. Todd Smith scored horrible reviews, although most critics enjoyed tracks "Preserve The Sexy" and "Freeze". Freeze was the album's second single and it features Lyfe Jennings. The album shipped 500,000 copies but sold just 367,000 copies. Despite the fact the album debuted at number-six, it quickly fell off in 6 weeks. LL Cool J said he will be doing his last album on Def Jam which is a sequel to Todd Smith. The original title for the album was called "My Favorite Flavors" and this is the 4th album of LL's where he has appeared either shirtless, or has used a bare/exposed part of his body as the cover of the album.

FULL ARTICLE AT WIKIPEDIA.ORG
This article is licensed under the GNU Free Documentation License.
It uses material from the Wikipedia article "Todd Smith."
Back to Article
/