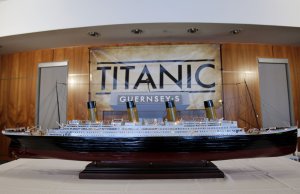 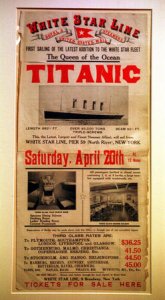 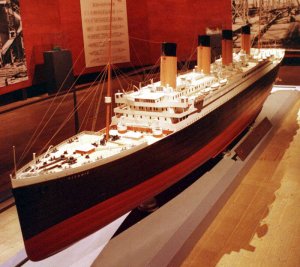 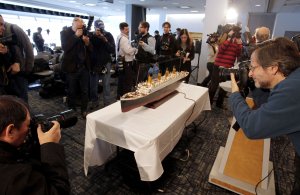 U.S. News // 9 years ago
Titanic artifacts to be auctioned
A New York auction house says it will auction a collection of more than 5,000 artifacts from the wreck of the Titanic.
U.S. News // 9 years ago
Anti-Catholic lawyer arrested
A Minneapolis lawyer, in dutch with a judge for making religious slurs in bankruptcy papers, was arrested Wednesday for failing to turn over business records.
Energy News // 9 years ago
Shell's arctic drilling faces opposition
Environmental and Alaskan native groups have filed a lawsuit challenging the Obama administration's decision to allow offshore oil drilling by Shell Oil in the Beaufort Sea near Alaska.
World News // 9 years ago
Titanic necklace stolen in Denmark
A necklace recovered from the sunken luxury steamship Titanic was stolen from an exhibit in Denmark, officials say.
U.S. News // 9 years ago
Co. gets ownership of Titanic artifacts
A Georgia company that salvaged more than 3,000 artifacts from the Titanic on the ocean floor has won ownership of the items after a 20-year court battle.
World News // 9 years ago
Teen who helped build Titanic finally receives headstone
A teen who died of injuries suffered in a fall while building the Titanic in 1910 will get a headstone at his unmarked Northern Ireland grave, officials said.
U.S. News // 9 years ago
Palin calls for drastic spending cuts
Sarah Palin said Sunday a "President Palin" would slash federal spending to avert national bankruptcy.
World News // 9 years ago
Anniversary of Titanic launch celebrated
Ceremonies in Belfast, Northern Ireland, were held to mark the 100th anniversary of the launching of the ill-fated ocean liner Titanic, authorities said.
U.S. News // 9 years ago
Piece of Titanic up for auction
A piece of the hull of the sunken liner Titanic will go up for auction in Dallas, with some of the proceeds earmarked for a charity, auction officials said.
Science News // 1 decade ago
Famous deep-sea submersible to get upgrade
Alvin, one of the world's best-known submersible research craft, is about to get an upgrade that will transform its capabilities, U.S. scientists say.

Artifacts recovered from the Titanic

RMS Titanic was a passenger liner that struck an iceberg on her maiden voyage from Southampton, England, to New York City, and sank on 15 April 1912, resulting in the deaths of 1,517 people in one of the deadliest peacetime maritime disasters in history. The largest passenger steamship in the world at the time, the Olympic-class RMS Titanic was owned by the White Star Line and constructed at the Harland and Wolff shipyard in Belfast, Ireland, UK. After setting sail for New York City on 10 April 1912 with 2,223 people on board, she hit an iceberg four days into the crossing, at 11:40 pm on 14 April 1912, and sank at 2:20 am on the morning of 15 April. The high casualty rate resulting from the sinking was due in part to the fact that, although complying with the regulations of the time, the ship carried lifeboats for only 1,178 people. A disproportionate number of men died due to the "women and children first" protocol that was enforced by the ship's crew. Titanic was designed by experienced engineers, using some of the most advanced technologies and extensive safety features of the time. The sinking of a passenger liner on her maiden voyage, the high loss of life and media frenzy over Titanic's famous victims, the legends about the sinking, the resulting changes in maritime law, and the discovery of the wreck have all contributed to the enduring interest in Titanic.

FULL ARTICLE AT WIKIPEDIA.ORG
This article is licensed under the GNU Free Documentation License.
It uses material from the Wikipedia article "Titanic ."
Back to Article
/