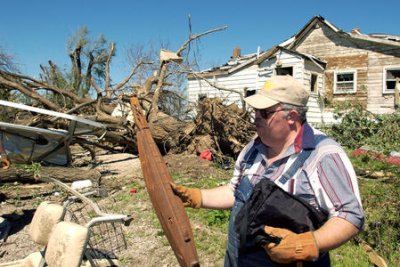 Top News // 1 year ago
The Almanac
On May 5, 2003, authorities said a two-day wave of tornadoes killed about 40 people in Kansas, Missouri and Tennessee.

Kristina Louise "Tina" Yothers (born May 5, 1973) is an American actress and singer. A child actor since the age of 8, she is best known for her role as Jennifer Keaton on the hit NBC series Family Ties, as well as for her roles in numerous television films throughout the 1980s and early 1990s including The Cherokee Trail, Crash Course, and Spunk: The Tonya Harding Story among others.

Yothers was born in Whittier, California, but spent half of the year in Flint, Michigan. Her father, Robert Yothers, was a television producer. She has three brothers, Jeffrey, Randy and Cory, who all acted in commercials as children. Her brother, Cory (born in 1972) being the most well-known, appearing in numerous films and television shows throughout the early 1980s, often credited as "Bumper" Yothers.

Yothers began her acting career in television advertisements at age three. Her first cinema role was in the 1981 television movie The Cherokee Trail. She also appeared in the 1982 feature film Shoot the Moon. Her most famous role was as Jennifer Keaton, the youngest daughter in the television comedy Family Ties from 1982 to 1989. She also competed in the Battle of the Network Stars in December 1988. When Family Ties ended, Yothers abandoned her blonde hair color and has since worn it black.

FULL ARTICLE AT WIKIPEDIA.ORG
This article is licensed under the GNU Free Documentation License.
It uses material from the Wikipedia article "Tina Yothers."
Back to Article
/